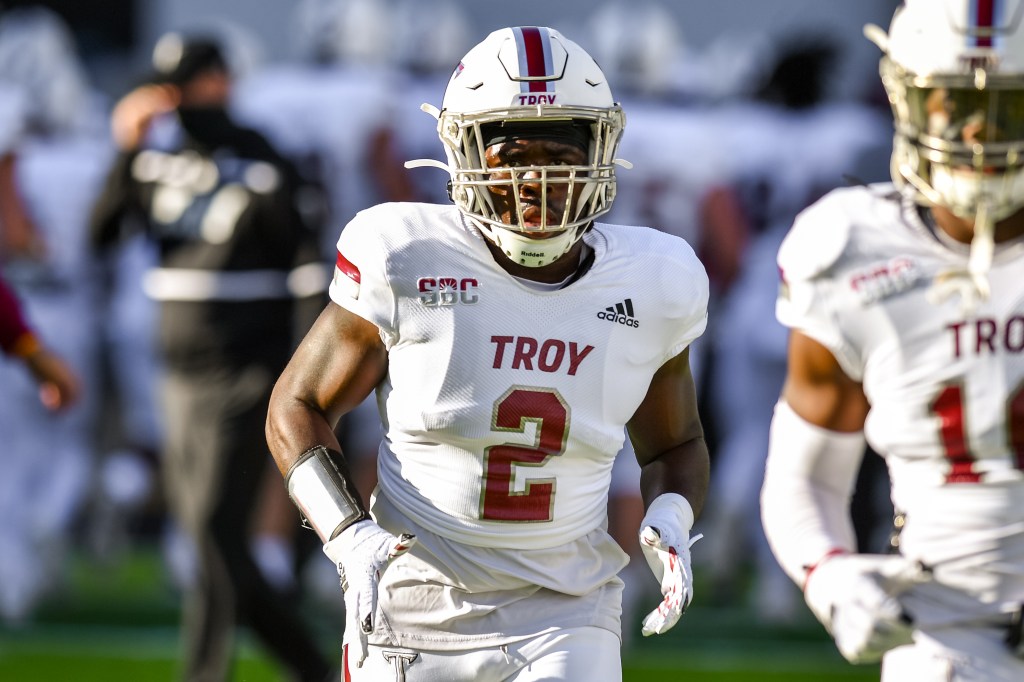 College football’s leading tackler, Troy’s Carlton Martial, has been named one of 10 semifinalists for the Burlsworth Trophy, the Burlsworth Trust announced Tuesday. The award is presented annually to the nation’s top player who began his career as a walk-on.

Martial, a native of Mobile, Ala., leads all of college football with 113 tackles this season following his 21-tackle performance against No. 9 Coastal Carolina this past Saturday – he also added 2.5 tackles for loss, a sack and an interception in the game. Martial’s 239 tackles the last two seasons are the most nationally and 24 more than his closest competition.

Checking in at 5-foot-9, the two-time All-American began his career as a walk-on at Troy with no FBS offers, three FCS offers (Alabama A&M, Alcorn State, Jackson State) and four DII offers (North Alabama, West Alabama, Tuskegee, West Florida). Martial made such an impact his true freshman season, he earned a scholarship before ever taking a collegiate snap.

His 21 tackles against Coastal are tied for the most by any player in the country this season and rank as the second most in Troy history. Martial’s back-to-back 100-tackle seasons are a first by a Troy player since 2001-02 while his 13 double-digit tackle games the last two seasons lead the country.

Martial has four interceptions the last two years from his linebacker position and his 28.5 tackles for loss since the start of the 2019 season are the fourth most nationally.

Last season, Martial was named to the Pro Football Focus All-America Second Team and was named the No. 35 player in the country by PFF. He became just the 12th player and first underclassman in the last 20 years at the FBS level to finish a season with at least 100 tackles, 15 tackles for loss and three interceptions. He was the only player in the country to rank in the top eight nationally in tackles (10.5) and tackles for loss per game (1.54), and he recorded double-digit tackles in seven of Troy’s games and added seven or more tackles in four other games.

He took the Sun Belt by storm his freshman season en route to Freshman All-America honors as he was rated by PFF as the 20th best defensive player in the country and fifth nationally against the run – three of the four players ahead of him were selected within the first 13 picks of the NFL Draft (minimum of 375 snaps).

The Burlsworth Trophy is named in honor of Brandon Burlsworth, former University of Arkansas Walk-On and All-American offensive lineman