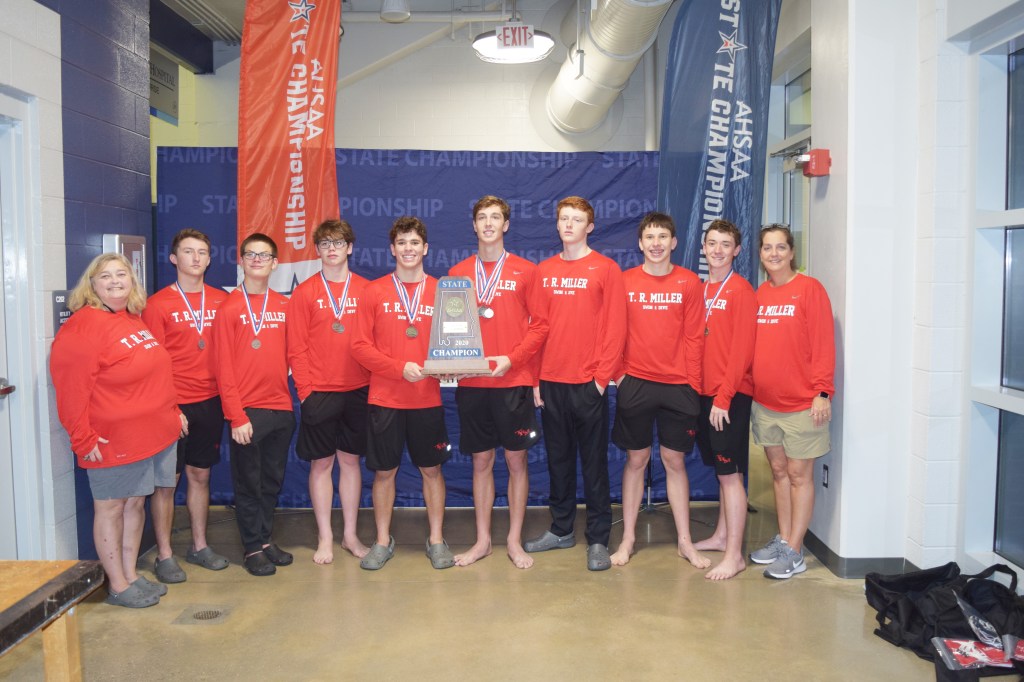 For the third year in a row, the T.R. Miller men’s swim and dive team claims a State Championship victory at the state swim meet hosted in Huntsville on December 5, 2020.

This swim season posed many restrictions for the men’s and women’s swim team due to COVID setting the bar extremely high just to qualify to swim at the state meet. New faster time standard changes, event location changes, sectional meet cancellations and COVID restrictions were among some of the challenges that were imposed across the state in late October for swim programs.

“The new time changes affected our men’s and women’s team greatly,” stated T.R. Miller coach Lisa Atkinson. “We had most of our boys and girls team with qualifying times to compete at the sectional meet which did not take place. Our teams had to work extra hard in the pool just to have a time to qualify to swim at the state meet.”

These changes kept most of the boys’ team and all of the girls’ team from being able to compete post season.

“It was discouraging” stated Atkinson. “We were in the process of trying to rebuild our men’s team after we graduated six swimmers last season. We had anticipated that our younger swimmers and our girls’ team would have the opportunity to swim at the sectional meet for the experience.”

“Jacob remained calm during his 5 hours of nerve racking competition which allowed him to pull off a 3rd place win and score for our team.” stated Coach Angel Boyd.

“Jacob qualifying to compete at the state meet was huge for our school,” Atkinson said. “We’ve never had a diver compete at state before. He finished 3rd overall in 1A-5A and gave us a 16 point lead before our swimmers ever entered the water.”

Mac Baxter, Senior Captain, finished first place earning a gold medal and was named individual state champion in the 200 freestyle.  He went on to place second earning a silver medal in the 500 freestyle earning 37 points for the team.

“Mac has been swimming for me since he was 6 years old,” Boyd said. “He displayed leadership which helped to lead the team to another state title.”

Atkins said the swimmer is an asset to the team.

“It’s hard to replace a kid like Mac in our lineup,” Atkinson said. “He is driven in the pool, displays leadership, never complains and is a very coachable kid. He will go on to be very successful in life.”

Baxter also delivered a commanding performance in the 200 and 400 relays as lead-off swimmer to help usher in another 1-5A State Title.

Nolan Atkinson, Captain, a junior, finished in third place earning a bronze medal in the 50 freestyle. He went on to finish secnd place in the 100 freestyle earning a silver medal and a total of 33 individual points for the team.

Atkinson, who sustained a torn labrum and dislocated shoulder during the last football game against Jackson, really stepped up to help his team, Atkinson said.

“After he was injured the second time, we were afraid he would not be able to compete at the state meet,” Atkinson said. “He showed true toughness and determination to fight through the pain and finish the races like he did was truly amazing..”

“Nolan not only showed leadership this season but true grit as he battled through what was thought to be a season ending injury, but he fought back and swam like a beast at State” Boyd said.

Atkinson, who underwent rehab just a few weeks prior to the competition, contributed greatly in helping his team secure another championship.

Junior standouts Caleb Kent and Ezra Carpenter both swam in the 50 freestyle contributing a combined effort of 27 points to the team’s score.  Kent, finishing fifth brought 14 points to the total tally during the state meet. Carpenter, who had a late start this season due to recovery from shoulder surgery, finished sixth place earning 13 points.

“These guys worked so hard this season, and I couldn’t be more proud of how they encouraged their teammates and stepped up when we needed them the most” Atkinson said.

Newcomer to the team, sophomore, Brooks Feeley finished ninth in his first state swim meet appearance. He joined the team this summer after the COVID restrictions were lifted.

“I’ve never seen a kid work so hard and with so much dedication,” Atkinson said. “His determination definitely paid off for him this season.”

Eighth grader Matthew Kirkland also contributed to the team’s success when he finished eighth overall in the 100 backstroke.

“We really put a lot of pressure on Matthew to cut his time in the backstroke through the season, and he definitely rose to the challenge,” Atkinson said. In addition to the 100 backstroke individual swim, Kirkland also contributed on the 200 Medley Relay.

Caleb Kent, Ezra Carpenter, Brooks Feeley, and Matthew Kirkland set the tone for the swim portion of the meet by swimming an amazing Medley relay – placing fifth in the state right off the bat – this was the highest place TRM has ever swam the 200 Medley relay. Mac Baxter, Ezra Carpenter, Caleb Kent and Nolan Atkinson secured the second place win in the 200 Freestyle Relay earning Silver medals and 34 points. The 400 Freestyle Relay was no different as Mac Baxter, Logan Blake, Caleb Kent and Nolan Atkinson secured the final 32 points needed and a third place Bronze medal to bring home another state title.

“Our relay teams some had new faces this year,” Atkinson said. “They all really stepped up to compete at a level some of them had not ever seen before and we are so proud of their accomplishments.”

Boyd was also impressed with the hard work and determination shown in preparation for the event and in bringing home top honors.

“There are truly no words that can describe how proud I am of these young men,” Boyd said. “They saw the task before them and stepped up to the blocks and swam their hearts out. It has been an absolute pleasure to coach them all this season.”

Atkinson described it as purely amazing.

“I am so proud of these guys,” Atkinson said. “They worked hard in the pool, worked around other sports or activities, and never gave up.”

All of these swimmers had a role to play in securing this state title, and I could not be prouder of how well they focused, performed and persevered, Atkinson said.