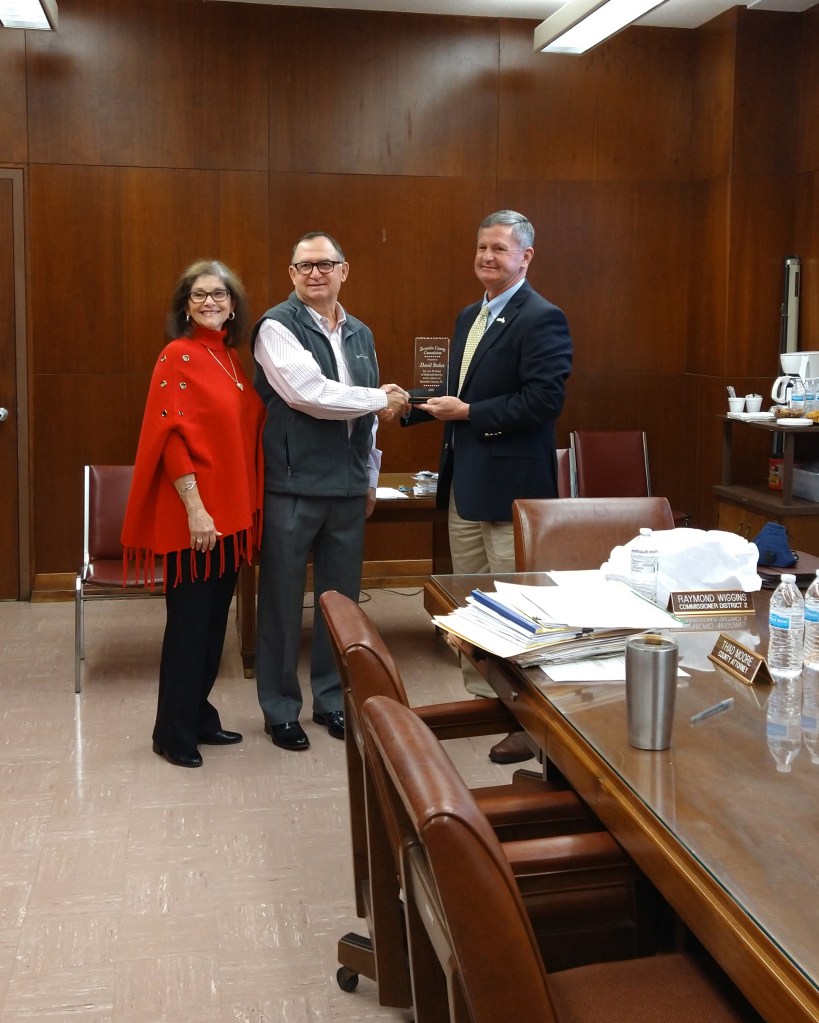 Escambia County Commissioners took some time on Monday to honor David Stokes for his time on the commission representing District 1.

Chairman Raymond Wiggins said that Stokes has served the people of Escambia County for many years and thanked him for his service.

“David worked on the Commission for 29 years and six months,” Wiggins said. “That’s a long time to serve the public and we thank him for everything he did while serving on the commission. He stepped down when he was experiencing some health issues and had to have some surgery. We wanted to wait until he was well to have him here for this presentation.”

Stokes, who was accompanied by his wife Debbie, thanked the commission for “putting up with him” for so many years.

“This was totally unnecessary but I am grateful,” Stokes told commissioners. “All of the thank you’s start with my wife. She has been with me every step of the way. I didn’t take much home with me, but when I did she was right there for me.”

“Thank you for being willing to step up,” Stokes told Dickey. “That brings me to thank (Governor) Kay Ivey and Lindsey Graham for appointing you to fill that position. Steven has been here only a short time, but he is impactful in his work. After 29 years, I was anxious about how this would perpetuate, but having Steven in the position is a good thing.”

Debbie Stokes said the time her husband was on the commission has spanned a lot of things over the years.

“Our first meeting happened while I was pregnant with (daughter) Elizabeth Ann,” Debbie said. “And she just had a baby four days ago. Over the years a lot of people have come and gone. Everything comes full circle. It was a great ride and he truly lived it.”

David said his time on the commission was enjoyable and he feels blessed to have been a part of the group.

“I have been blessed by God tremendously,” Stokes said. “I’m glad to be above ground. Thank you all for what you put up with for 29 years a six months.”

Stokes served the citizens of Escambia County located in District 1 which encompassed a large portion of the city of Brewton.