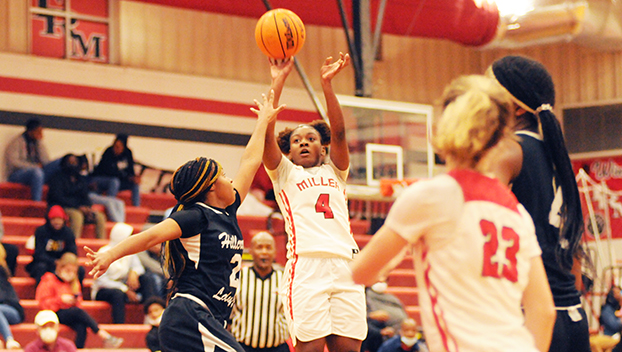 Trailing 22-17 at halftime, T.R. Miller came out fighting in the third period and held on late as the Lady Tigers defeated Hillcrest-Evergreen 41-37 to claim the AHSAA Class 3A, Area 2 championship tonight in Brewton.

Lady Tigers’ senior Vanessa Samuels scored eight of her team’s 13 points in the fourth period, and added five in the third to lead TRM with 16 points.

In the third period, Samuels got the ball rolling with a pull up jumper early, and added a 3-pointer to cut the game to 23-22.

The Lady Jaguars, an athletic bunch themselves, kept their lead for a short time until Jayden Mitchell sparked a rally after a rebound and putback. Natasia Reid, an eighth grader, then got a steal and made a foul shot on the other end to cut Hillcrest’s lead to 27-25.

Meg Fountain added a rebound and a putback to tie the game at 27-all going into the fourth period.

“We didn’t do anything that special,” TRM coach Ron Jackson said. “We knew they were a lot more athletic than we are. We pressed them the whole game, and wore them out in the fourth quarter.

A short time later, Samuels helped give the Lady Tigers their first lead of the game with a 3-pointer early in the fourth. From there, TRM never gave up the lead despite the Lady Jaguars attack late.

Mitchell hit a rebound and a putback to go up 31-27, and Samuels sliced through the HHS defense for a bucket with 4 minutes to go.

Siyonesty Gill hit a free throw for HHS, but Samuels answered with a pull-up jumper.

Gill then hit a layup, and Sabryn Riley got a layup to cut the game to 35-32 with less than 3 minutes to go.

That didn’t deter Samuels, who converted a layup to go for a five-point advantage.

Hillcrest-Evergreen answered with a nice putback from Amya Jackson.

“For her to step up and hit those free throws toward the end, that was big for a freshman,” Jackson said.

Jackson said Samuels, who is quick off the dribble, took advantage of the Lady Jaguars, slicing and dicing her way through the box.

Jackson said Hillcrest had a good strategy as well.

Jackson said once the girls got the lead, the plan was to spread the Lady Jaguars out and pound the lane.

He said while the offense played well, the girls’ defense stood out, adding the Reed put on a “defensive exhibition.”

Jadyen Mitchell contributed with 12 points for the Lady Tigers.

With this victory, the Lady Tigers advance to the Class 3A south sub regional, where they’ll face the Area 4 runner up on Monday night.