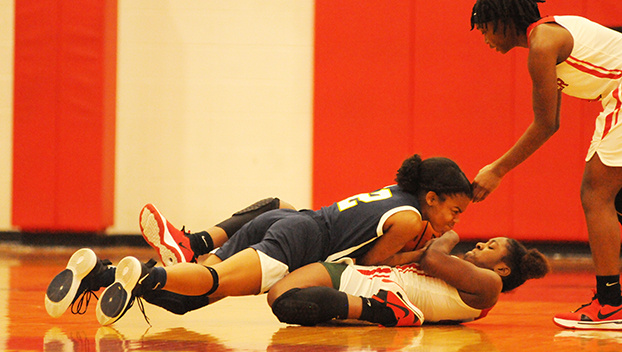 T.R. Miller’s Vanessa Samuel and Jayden Mitchell finished in double figures to help lead the Lady Tigers to a 45-25 victory over Cottage Hill tonight in the AHSAA Class 3A sub regional in Brewton.

Mitchell led her team with 15 points, and Samuell dished in nine for TRM.

“I guess we thought because we had a good game the other night we’d show up and the other team would play down and we’d win,” Jackson said. “In the playoffs, one loss you’re out. Every game is the house is on fire.”

With the victory, the Lady Tigers advance to face the winner of the Thomasville-Greensboro game in the first round of the southwest regional. If THS wins, the Lady Tigers host the next round. If GHS wins, TRM travels.

In the second period, Mitchell hit a 3-pointer and jump shot back to back to give TRM a healthy 15-6 lead. Mitchell, and Samuel added some free throws a short time later to build the lead.

Cottage Hill’s Taylor Davidson and Alexcia Gibbs added a 3-pointer and layup for the Warriors to cut it to seven at the break.

In the third, TRM widened the gap with good defense and transition.

SAmuel converted a steal into an easy bucket, Serenity Mitchell later got a pair of free throws off a foul with 2:22 left. Jayden Mitchell then hit a block on the other end to keep the Lady Warriors in check.

Jayden and Serenity Mitchell, along with Samuel kept the pedal to the medal in the fourth period and the Lady Tigers’ defense held Cottage Hill at bay.