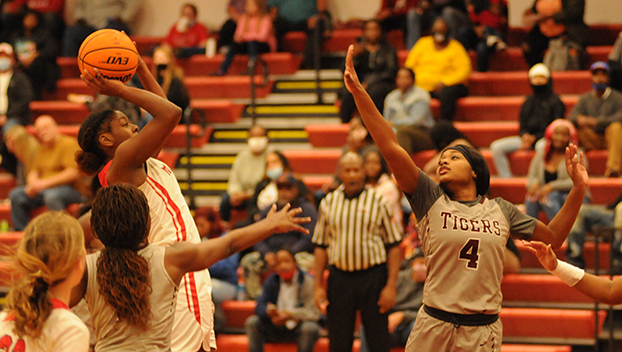 T.R. Miller’s Vanessa Samuel scored 34 points to help lead the Lady Tigers to a 55-16 victory tonight over Thomasville in the Class 3A southwest regional semifinal in Brewton.

Samuel, combined with her team’s stellar defense throughout the game and the constant feeding of the ball to her down low, scored all 10 of her team’s points in the first period, and 12 of the team’s 14 in the second. TRM led 24-7 at halftime.

With the victory, the No. 8 Lady Tigers advance to face Hillcrest-Evergreen in the regional finals next Wed., Feb. 24, at 5:30 p.m. at Garrett Coliseum in Montgomery.

“Even when you play good defense, you score,” Jackson said, adding that Natasia Reed and Meg Fountain both did a good job for the team.

Jackson said Samuel, the lone senior on the floor, led well as well.

At present, TRM is playing with two eighth graders, a freshman, a sophomore and one senior on the hardwood.

Jackson said the girls are practicing every day and are getting better every game.

“It’s tough to ask eighth graders to come,” he said about practice. “They’re stepping up. They just fall right in line, and loving it.

“Everything that I ask of them in practice, no matter how much I run them, they just keep doing what they’re asked to do,” he said. “I think win, lose or draw, when you’ve got a team that’s giving everything, that’s all that matters.”