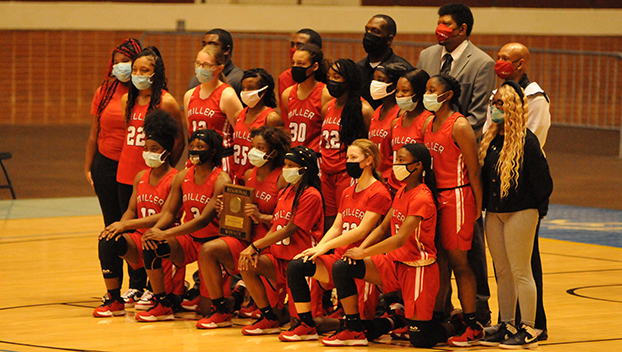 Samuel, a senior, finished with 22 points and 11 rebounds and four steals, while Fountain – an eighth grader – dished in 16 points and three steals.

With this victory, TRM (15-2) advances to the Final Four. The Lady Tigers will face Sylvania on Mon., March 1, at 2 p.m. at Bill Harris Arena in Birmingham. This marks the second straight trip to the Final Four for the girls team.

In the second overtime, Hillcrest-Evergreen’s Imani White ladeled in the back-half of a free throw opportunity, and TRM took a timeout shortly afterward at 2:05.

Some 36 seconds later, Fountain made a free throw to tie the game up at 49-all.

After a Lady Jaguars timeout, the Lady Tigers ramped up pressure and Fountain got a steal and easy trip to the basket to help TRM take a 51-49 lead.

On the ensuing inbound, Lady Tigers guard Natasia Reed, another eighth grader, managed to get a steal and TRM took a timeout to regroup.

TRM’s Jayden Mitchell found herself at the foul line, making both shots for a 53-49 lead with 37 seconds left in 2 OT.

The Lady Jaguars burned a timeout 11 seconds later after a field goal by Siyonesty Gill.

From there, Samuel made two free throws, and Gill converted a layup.

In the first overtime, the Lady Tigers at clock as far as they could go in the 4-minute period, where Serenity Mitchell drained a 3-pointer with 1:40 left.

Samuel then made two free throws, and Gill answered with an easy bucket.

As time expired, TRM’s girls celebrated thinking they won the game. But, after official review, the game continued into the second overtime.

Gill helped send the game into overtime at the end of regulation with a 3-pointer with 20 seconds left in the fourth period.

Gill’s 3-pointer capped off a strong second-half showing by the Lady Jaguars. HHS outscored TRM 30-16 in the second half.

Rebekah Rogers led the Lady Jagugars with 16 points; Gill added 14; and Riley had 11.