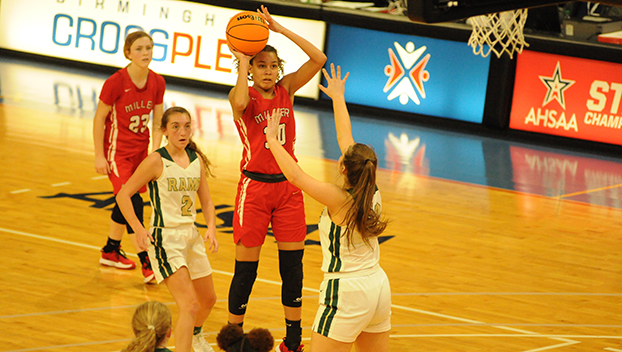 Lady Tigers fall to Sylvania in 3A state semifinals

Starting two eighth graders, a freshman, a sophomore and a senior, the T.R. Miller Lady Tigers advanced to the AHSAA Class 3A Final Four, where they played close with Sylvania early today, but ended up falling 55-36 at the Crossplex’s Bill Harris Arena.

“We usually would wear people down,” Jackson said. “The team we played today, they were in good shape.”

The Lady Tigers played close with the Lady Rams in the first period, closing an early deficit. However, the Lady Rams went on a 12-0 run in the second period, from which TRM couldn’t recover.

“They knew that we didn’t have a post player,” he said. “They packed it in tight. We couldn’t get inside (on offense).”

Jackson said the ball game at the start was close because SHS made the right adjustment.

“We went up a couple times, bu then they figured it out,” he said. “They just kept doing what they were doing.”

The only player that was consistent from the perimeter for TRM was Meg Fountain, who was 2-of-4 from the arch. She finished with nine points.

The Lady Rams went on to outscore the Lady Tigers 12-6 in the third period, and 18-16 in the fourth.

The future is looking bright for the Lady Tigers.

Jackson said he was just so proud of the girls after the game today.

“I’m just proud of these young ladies for getting this far,” he said. “They did a heck of a job. They outdid any of my expectations.

“There aren’t many who can say they were a part of a team that made this accomplishment,” he said. “This is one of the greatest teams we’ve had in a long time. It’s such an achievement.”

The Lady Tigers ended their season 12-3.