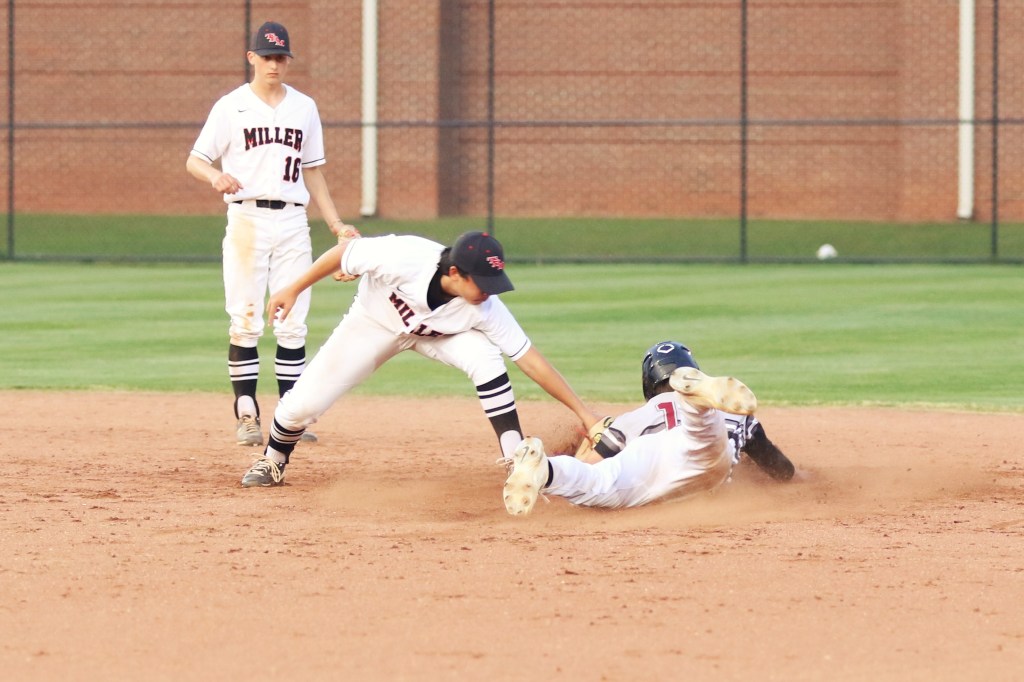 T.R. Miller Tiger Jaxson Flores works for the team shown going for the tag at second base during playoff action Friday in Brewton. The team advances to the second round of playoff action with a game Friday against Thomasville.

W.S. Neal ended its baseball season Monday night in the third game of a first-round series, falling 4-2 to Dale County in the Class 4A state playoffs.

T.R. Miller will face Thomasville on Friday in the second round of playoff action enroute to a state title.

In Monday’s game for W.S. Neal, the team was tied with DCHS 202 after the second inning, but the Warriors added two runs in the fifth and held on late for the win.

Corey Hammonds went 3-for-3 with two RBIs; Devin Grider and Nick Cogman had one RBI each to lead DCHS.

Hammonds gave up three hits and no runs and struck out four to earn the victory.

Bosarge gave up four runs on eight hits in the loss.

On Friday, W.S. Neal and Dale County played in game three of a Class 4A first-round series.

Jasean Jones and Sam Bosarge went 2-for-4 with an RBI each to lead the Blue Eagles. Gavin Leggett, Jordan Crane and Jordan Sims had one hit each.

WSN scored one run in the third and four runs in the fifth inning.

DCHS came back and had a big sixth inning, scoring eight runs to take a lead it wouldn’t give up.

Nick Cogman struck out one and allowed no runs on no hits in 2.0 innings to earn the win for DCHS.

Trailing 5-0 in the third inning, the Blue Eagles scored three runs, added one run in the fifth and two in the sixth in the win.

Jones went 3-for-4 with three RBIs and two runs; Crane went 2-for-4 with two RBIs; Walker Hoomes, Carter Hodges, Dakota Rose and Jordan Sims had one hit each.

For the Tigers, a couple of wins on Friday put them in a spot to make a run for the state title.

In those games, TRM put a total of 25 points on the board against their opponent.

Rowell allowed two runs on four hits and struckout five in 4.0 innings to earn the win. Sam Kelly came in for the save, striking out seven and allowing no runs on no hits in 3.0 innings.

Jernigan went 2-for-2 with four RBIs; and Rowell went 1-for-2 with two RBIs to lead TRM.

Jernigan also received the win on the mound, throwing a one-hitter and striking out 10 batters in 5.0 innings.