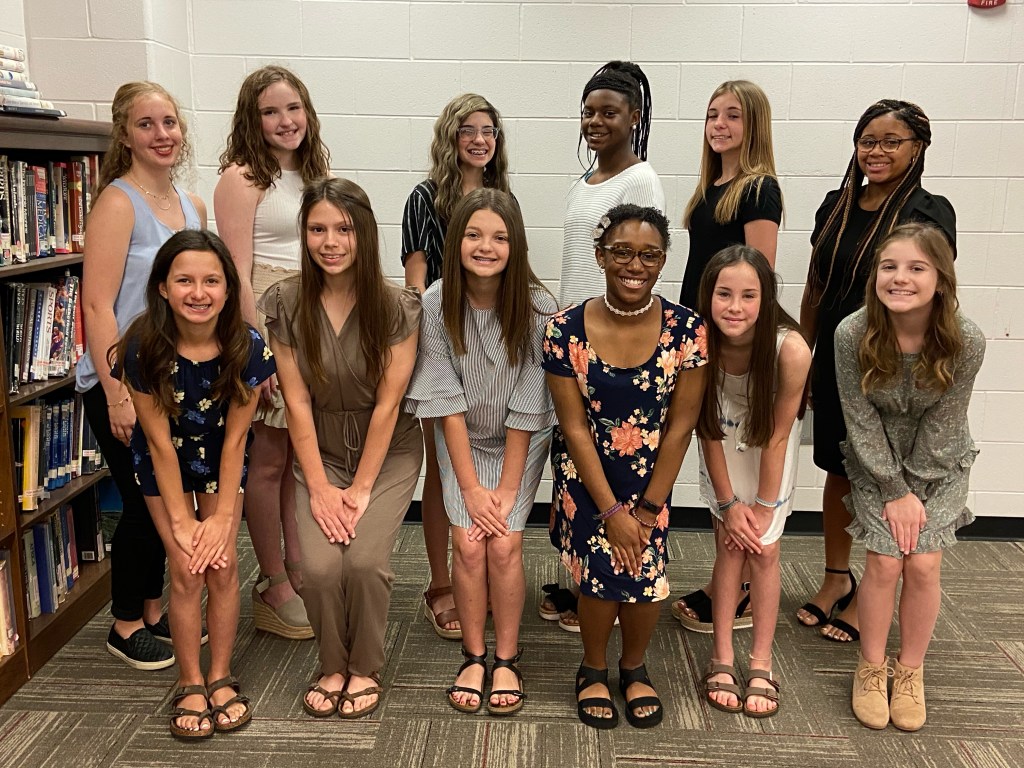 Since sometime in the early 1980s, events at Brewton Middle School have been missing something.

There was no lack of school spirit among faculty or students, but the one thing missing was a cheer leading squad.

That all changed last month when 12 young ladies jumped, chanted and danced their way into the return of cheer leading at Brewton Middle School.

BMS Principal Madelyn Cave said there had not been a squad since 1983 or 1984, and the implementing the squad was not a decision made lightly.

“For many years, the administration was approached by students and parents wanting to have cheerleaders at Brewton Middle School,” Cave said.  “But I, as many previous administrators, felt like the programs we had in place, such as band, choir, art, and athletic teams, were already very strong.  Our kids were involved in several activities both in school as well as in the community and the YMCA.  We wanted kids to be able to participate in a variety of activities, but didn’t want anything added that might negatively affect what had been built over time.  Plus, we were able to involve lots of kids in spirit activities at school as led by teachers, administrators and students without separating a specific small group.”

Cave said the move to find a coach for the squad was also one that required some finesse.

“In trying to determine where to begin with this program, I spoke with several former cheer coaches from other schools,” Cave said. “I had a few faculty in mind to approach about taking this on as a sponsor and coach.  Mrs. Tammy Alford had been a cheer coach for 20 years in Luverne, but had been out of that mode for several years.  I didn’t think she would be interested in taking on cheer, but I valued her expertise and asked her lots of questions and advise.  In one of our conversations something changed and I saw the possibility that she might just miss being a cheer coach.  Before Spring Break, I asked her to pray about it and talk with her husband to see if this was something she wanted to do again for us at Brewton Middle School.  When we returned from Spring Break she agreed to coach the new BMS Cheerleaders and she went to work immediately.”

Cave said Alford set up a tryout clinic led by upcoming senior cheerleaders. Those interested in trying out for the BMS squad were coached in cheers, jumps and even a dance routine.

“We held a parent meeting and then they had three practices, mock tryouts, and finally try-outs on Friday, April 16th,” Cave said.  “Our Varsity Representative (where we purchase uniforms) helped locate judges who were not from this area and were certified cheer coaches at other schools. Girls’ scores were determined by teacher evaluations, a group cheer, group dance, spirit, two jumps, and a sideline chant. Tumbling could also earn some bonus points.  When the scores were tabulated, we looked for a natural cut and were able to have 12 cheerleaders on our first squad.”

The squad will gain experience and physical fitness that will allow the program to carry over from BMS to T.R. Miller High School, Cave said.