Citizens of the Year announced for Brewton area 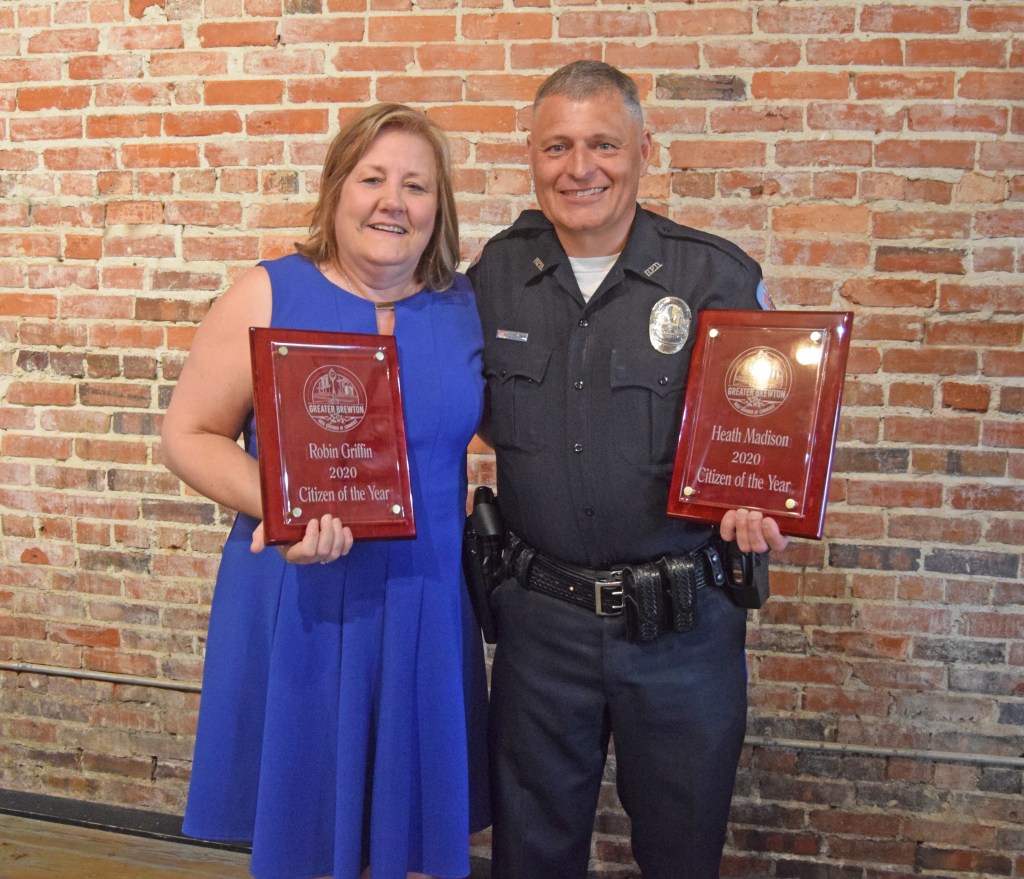 Robin Griffin, left, and Heath Madison were named Brewton's 2021 Citizens of the Year at the annual membership gathering of the Greater Brewton Area Chamber of Commerce.

Two of Brewton’s finest residents were honored Thursday evening by being named the city’s Citizens of the Year at the annual awards and membership social hosted by the Greater Brewton Area Chamber of Commerce.

Brewton Police Officer Heath Madison and Brewton nurse Robin Griffin were awarded the annual honor following an introduction from those who know them well within their professions.

Mayor Yank Lovelace called Madison a “valued and dedicated public servant” who has served the city for many years in many areas of law enforcement and education.

“He has been a public servant to this community since 2009 when he became a Brewton police officer,” Lovelace said. “He is committed to this city, the people and to his family. He has been a valuable resource to the police department teaching middle school students about the dangers of drug abuse. He is one of the best known and most beloved officers we have.”

Madison was surprised by the honor and offered his thanks for the award.

“I thought I was going to have to sing for ya’ll tonight,” Madison said. “I’m honored and I thank you very much.”

Stephanie Walker read the nomination that made the Citizen of the Year award evident for Griffin.

“Without being asked, Robin Griffin offered her best to our community,” Walker said. “but she has a history of doing that.”

Among the accolades for Griffin, Walker spoke of a sewing project to create face masks when the hospital did not have enough personal protective equipment during the early days of the pandemic. Under Griffin’s direction, she had a crew that sewed over 5,000 masks addressing a critical need in the community at the beginning of the pandemic.

Griffin, who was surprised by family at the award announcement, said she was “blown away” by the recognition.

“I don’t deserve this,” Griffin said. “We love this community and I thank you all for the opportunity to let us serve our community.”

For more details from Thursday’s event, please see the Wednesday edition of The Brewton Standard.