Car show could be biggest in festival history 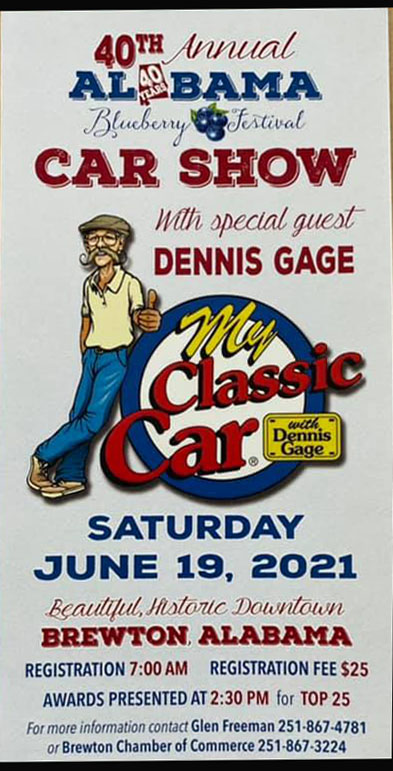 The beauty, the power and the memories are some of the things that bring throngs of viewers to car shows.

This year, the annual car show that has become a permanent part of the Alabama Blueberry Festival, will be just a little more special.

Dennis Gage will be coming to Brewton to be a part of the event with “My Classic Car” with assistance from Glen Freeman.

Gage is the host of “My Classic Car” which is now in its 24 season on a variety of broadcast channels.

Gage may be best known by his signature handlebar mustache, but his expertise in the field of cars has garnered plenty of attention.

Gage produces a series on classic automobiles that had its beginning with TNN and SPEED channels, and later moved to MAVTv and Velocity and most recently on Motor Trend.

The series features Gage and his visits to check out classic car shows and personal collections of participants. The show also features guest appearances from celebrities including Jay Leon.

According to information from AltDriver, after high school graduation, Gage headed to college in Illinois at North Central College. His undergraduate research in quantum physics led to him receiving an American Chemical Society award. He eventually went on to finish up his degree program, then pursued further education at the University of Idaho, where he received a PhD in Chemistry. During his time there, he also became an avid climber and mountaineer.Along with his school work, Dennis also had a big passion for music, and he played in several different bands. He even opened for acts such as Charlie Daniels and Waylon Jennings. Although he loved playing his pedal steel guitar, he decided to drop his music career as he pursued his PhD. After his schooling was complete, he pursued a career at The Procter Gamble company. There, he worked on and created popular P&G foods, such as Pringles, and he also owned multiple patents on many of the products. After attaining some more residual income, Gage focused back on classic cars and hot rods. Gage lives in Evansville, Indiana, with his wife Ellen and their three kids. His son has even been seen riding with Gage on the Trippin’ on Two Wheels travel series.

Freeman has been responsible for organizing and presenting car shows for groups like the Brewton Lions Club, the Greater Brewton Area Chamber of Commerce and others for many years in the Brewton area.

The show for the 2021 Alabama Blueberry Festival will get underway with registration at 7 a.m. near the main entrance to the festival location in downtown Brewton. Registration fee is $25 per vehicle. Awards for the top 25 in the show will be presented at 2:30 p.m., just prior to festival closing.