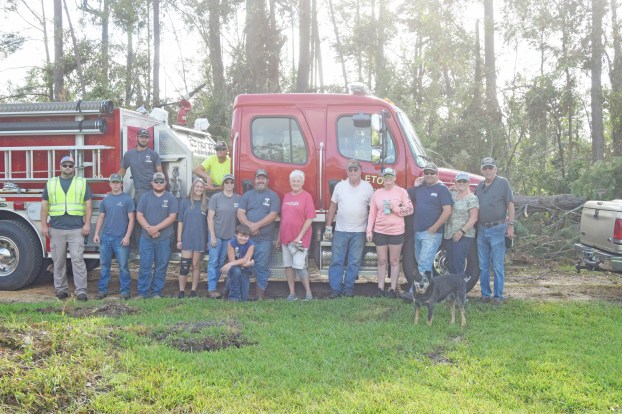 More than a dozen members of the Appleton and Wallace Volunteer Fire Departments showed up to the property of Tommy and Linda Jernigan Saturday morning to help with damage left by the recent tornado that swept through 22 miles of land in Escambia County.

Alex Singleton, chief of the Wallace VFD and assistant chief for the Appleton VFD, said it was just something they wanted to do for a neighbor.

“They got hit really hard,” Singleton said. “We were contacted by an older couple of whave a wheelchair-bound son who were feeling overwhelmed and needed help.”

Singleton said the family had two trucks, a tractor and a boat all stuck under a demolished shed with trees down on them.

“Their insurance didn’t want to pay to cut and remove the trees since they weren’t on the house,” Singleton said. “But the pressure fro the tornado blew out a lot of their windows and we just want to help our community any way we can. That’s what we’re here for.”

The crews converged on the property off Kirkland Road on Fox Run Lane where the Jernigan’s reside.

“We were lucky,” Linda Jernigan said. “We have so much damage it’s unbelievable.”

In the wreckage strewn around the Jernigan property, the loss of several vehicles, a travel trailer and other items was evident Saturday morning.

Workers with the two departments cut trees and removed debris on the property for several hours Saturday morning.

Singleton said the group worked immediately after the storm to assist their neighbors in the area they cover.

“We performed door-to-door search and rescue operations for five hours starting right after the tornado came through,” Singleton said. “We cut dozens of trees to clear roadways, but must of our searching had to be done on foot because of the extent of the damage.”

Helen Jackson, fire chief at Appleton VFD, said the work of the two departments is a common thing for them.

“We cover for each other on a lot of calls,” Jackson said. “They have a smaller department and sometimes they need our help. We do what we do to help our neighbors – including the other department. We’re all family and that’s what family does.”

The residents in pockets of destruction in East Brewton will be cleaning up for weeks and maybe even months to... read more