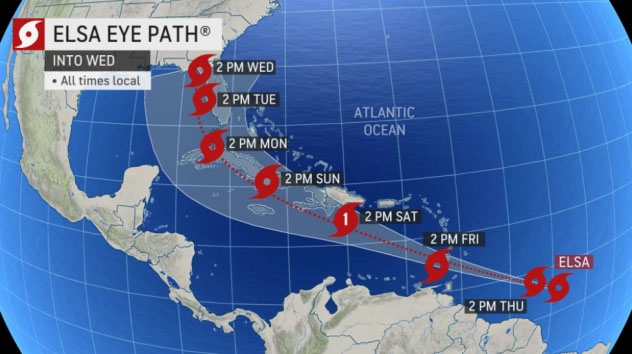 Tropical Storm Elsa is drawing attention of meteorologists as well as residents in the Southeastern United States today as the storm continues to strengthen.

Forecasters continued to keep a close eye on Tropical Storm Elsa after it was named the fifth storm of the Atlantic hurricane season early Thursday morning. The storm is likely to strengthen into the first hurricane of 2021 in the Atlantic and is predicted to approach the United States next week after it unleashes heavy rain, strong winds and stirs up dangerous seas in the Caribbean islands starting on Friday.

Elsa was racing westward at 28 mph Thursday afternoon, about 680 miles east-southeast of the Windward Islands and had maximum sustained winds of 45 mph.

The system is expected to take a turn to the west-northwest Thursday, and a general path in the same direction is forecast to continue as the storm moves into the Caribbean this weekend.

AccuWeather meteorologists are concerned that Elsa could strengthen into a hurricane as it approaches the Windward Islands. But, even if it doesn’t reach hurricane force by the time it reaches the islands, the storm is still expected to become a hurricane over central Caribbean waters this weekend. A hurricane has maximum sustained winds of 74 mph or greater.

If Elsa moves over one or both of the large, mountainous islands of Hispaniola and Cuba, then the system will likely weaken. Should it track in between or south of these islands, then Elsa could maintain strength or even strengthen further. Waters are sufficiently warm to maintain and feed a tropical system throughout the Caribbean. However, AccuWeather forecasters point out that other inhibiting factors, such as wind shear or a flow of dry air from South America, could keep Elsa’s strength in check or cause it to weaken.

If Elsa manages to slide south of these Caribbean islands and enter the Gulf of Mexico largely unscathed, a more potent hurricane could evolve and potentially impact the U.S. A track into the eastern Gulf of Mexico appears most likely at this time, according to AccuWeather forecasters.

The graphic attached to this story was released at 1 p.m. central time Thursday and is only a projection of the expected path and strength of the storm.

Residents along the coasts of Florida and along the Gulf Coast are urged to remain alert and aware of changing weather conditions over the next 4 to 6 days when a more clear picture of the storm forecast will be made.