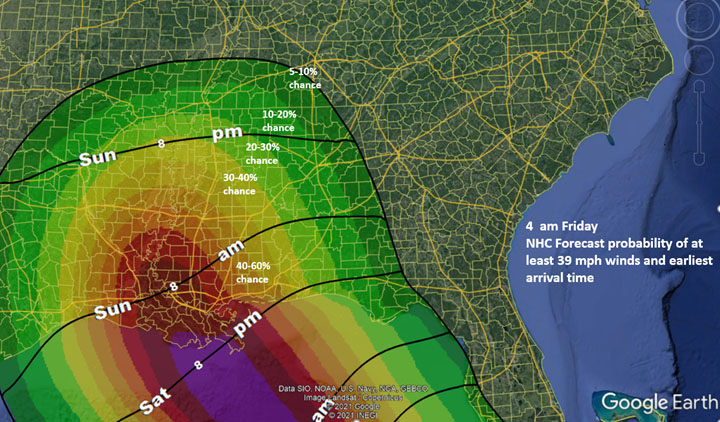 A Tropical Storm Watch and Storm Surge Watch is in effect for Mobile and Baldwin counties which may be upgraded to Warnings later today.

Models are fairly consistent in bringing Ida’s landfall onto the Louisiana or Mississippi coast sometime between late Sunday afternoon to very early Monday morning.  This is forecast to be a major, Category 3 hurricane with sustained winds of 115 mph and higher gusts.  Also, some slight adjustments to the track are still possible during the next couple of days, so keep up to date with the latest forecasts.

As I mention for every storm, the cone of uncertainty represents where the “center” of circulation is forecast, NOT impacts.  Impacts for Ida will occur well outside the cone, including portions of Alabama well inland.

A storm surge of 3-5 ft is expected along the coast and Mobile Bay from late Saturday through Monday.

There is a 40-60% chance of sustained tropical storm-force winds in far southwest Alabama which could occur as early as Saturday evening near the coast.  All preparedness activities should be completed by Saturday afternoon.

Tornadoes will be possible in southwest Alabama beginning Saturday night, over the southern half of the state on Sunday, and across portions of the state well inland both Monday and Tuesday.  The specific threat locations will be dependent upon the exact track, but the threat will likely occur all the way to the Tennessee state line.

Widespread 4-8 inches of rain are forecast for north and west Alabama by Tuesday night and there could be spots that receive double these amounts.  Flash Flood Watches will likely be issued this weekend for portions of the state.