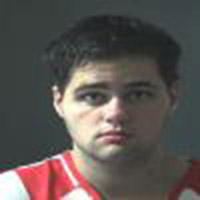 A transient man was arrested Wednesday (Jan. 5) and is facing multiple charges after he came to East Brewton.
Cameron Sparks, 20, was arrested and charged with rape second degree, facilitating solicitation of unlawful sexual conduct with a child, traveling to meet a child for an unlawful sex act, interfering with custody, as a result of the arrest.
According to East Brewton Police Chief Kenny Brazile, Sparks is believed to have come to East Brewton from West Virginia.
“From what we have found in our investigation, Sparks came from West Virginia by bus to Birmingham,” Brazile said. “He then hitchhiked for two days to make it to East Brewton and meet up with a female juvenile.”
Brazile said Sparks befriended the juvenile on social media and came to East Brewton where the two rendezvoused early on New Year’s night.
“We began our hunt for the suspect when the juvenile went missing from her home on the morning of Jan. 2,” Brazile said. “We were able to locate the pair on Jan. 5 and took the suspect into custody. The juvenile has been returned to the family.”
Brazile said the family received several tips on the whereabouts of the two from friends on social media.
“We were able to trace them through some of those tips,” Brazile said. “In this case, social media helped us find these two and get the juvenile back to the family.”
Brazile said parents need to be aware of activity of children on social media at all times.
“When someone makes contact, especially with juveniles, the comments they make can certainly be a bad thing,” Brazile said. “I want to encourage parents to be extra mindful of the activity of minors who are on the internet and use social media in any way.”