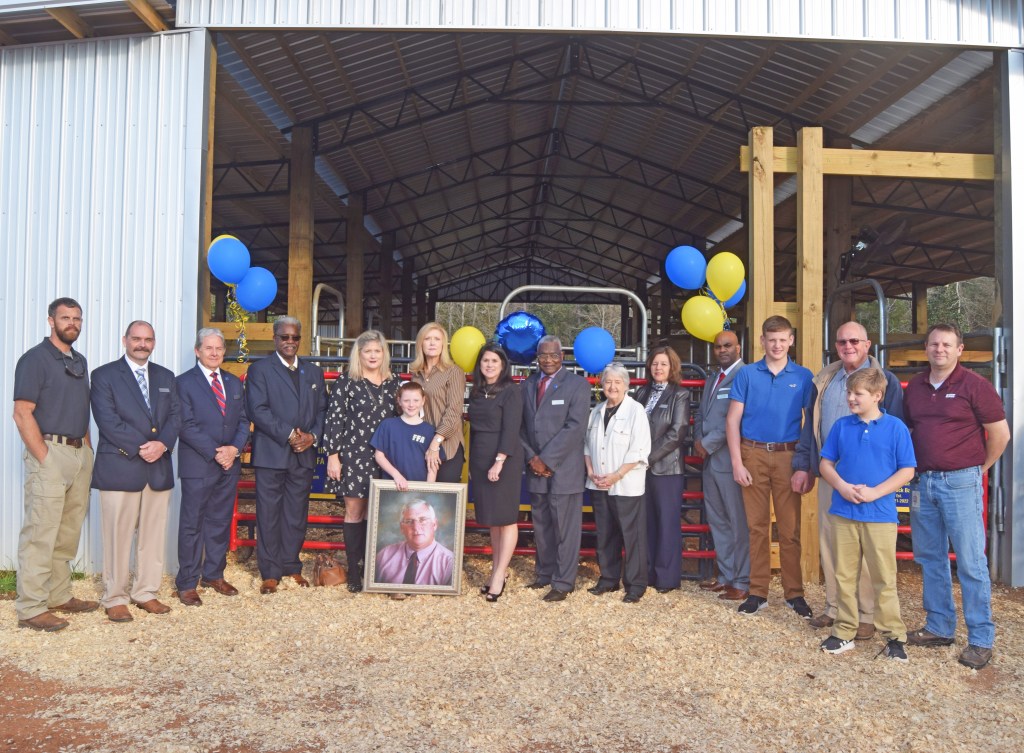 A dream of the late Phillip Ellis was to have a livestock facility on the campus at W.S. Neal High School. On Friday, that dream became an official reality with a ribbon cutting for the newly-completed Phillip Ellis Livestock Facilities.
Todd Williamson, principal at W.S. Neal High School, said Ellis devoted his career to the high school, first as an ag teacher for 18 years followed by a 20-year stint as the school’s principal.
“It’s not often you hear of someone who gives 38 years of their life to one school,” Williams said prior to a ribbon cutting ceremony. “His dream for nearly 40 years ago was to have this kind of facility here. Nothing could be more appropriate today.”
Saundra Ellis, wife of the honoree, was on hand with other members of the family to participate in the ribbon cutting.
Saundra said the young agriculture teacher loved the school he served during his career.
“He was 21 when he came to W.S. Neal,” Saundra said.
Josh Coleman, current ag teacher at the school, said the culmination seen with the official opening of the facility is one that has been years in the making.
“It has been more than two years since the planning of the facility began,” Coleman said. “It’s so good to see it finally get to a place that it needs to be to be able to get kids involved.”
Those kids — 22 of them — are now involved in raising calves and preparing them for shows and sales in the coming weeks.
“A lot of kids might be interested in raising a calf but have no where to do that,” Coleman said. “We are happy to now have a place that they can do that and learn about cattle.”
Those lessons learned include everything from financial management, how to properly care for livestock and possible careers in agriculture, Coleman said.
The 22 show animals currently housed in the facility are owned by individual students and are cared for by their owners, Coleman said.
“These students, that range in age from fifth grade through seniors, are working toward participating in a county show in Luverne and in the state show in Montgomery,” Coleman said. “There are 270 FFA programs in the state and only about 10 percent have similar facilities. But, we are one of only a few that have on-campus facilities for our students.”
Members of the Escambia County School Board were on hand for the ribbon cutting event. Representatives from contributing groups and organizations were also on hand to witness the ceremony.
Those making financial contributions that brought the facility to reality include Gulf Coast RCD, Poarch Creek Band of Indians, Bondurant Lumber, State Representative Alan Baker, and County Commissioner Raymond Wiggins. Parents of students and local farmers also helped to make the facility possible.