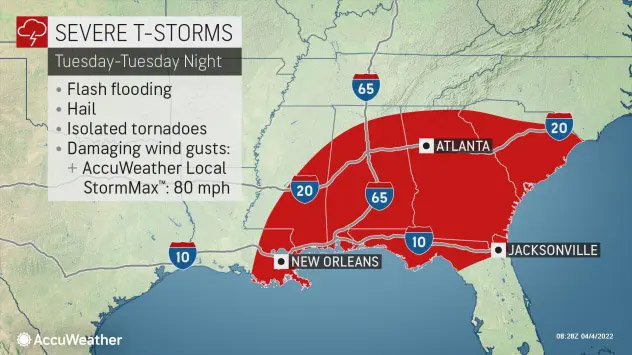 Forecasters from the National Weather Service in Mobile have upgraded the risk of severe weather for the area moving to a Level 3 out of 5 weather event for Tuesday and Wednesday.

According to NWS officials, the update shows what’s new for the forecast for South Alabama and Northwest Florida.

The main change with this update is that there is now an Enhanced Risk of severe storms over much of the area on Tuesday.  A Slight Risk continues for Wednesday.  We continue to expect two rounds of potential severe weather, with the first from late tonight through early Tuesday evening and the second from late Wednesday morning through the evening hours.  Localized flash flooding remains possible on Tuesday with generally 1 to 3″ of rain with locally higher amounts. Severe storms through the period will be capable of producing damaging winds, large hail, and tornadoes.

Chamber sets date for ‘Kick It At The Creek’