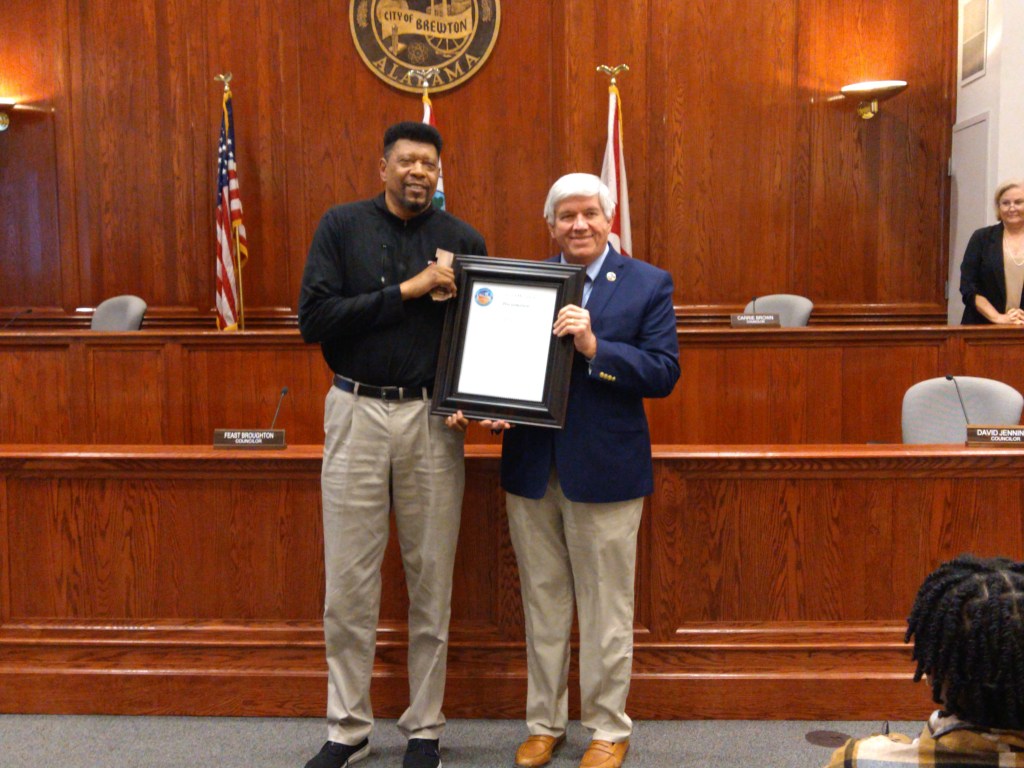 The Brewton City Council chamber was filled to near capacity Monday as student athletes and supporters turned out to help recognize Coach Ronald Jackson.
Brewton Mayor Yank Lovelace read from the proclamation honoring Jackson’s history as head girls basketball coach at T.R. Miller High School.
“With more than 30 years of service to the city of Brewton, its residents and Brewton City Schools, Coach Jackson’s dedication to excellence has resulted in five state champtionship titles and 818 total wins,” Lovelace said. “His teams have fostered dozens of successful collegiate and professional basketball players and division one coaches.”
“Generations of Brewton residents have thrived after learning teamwork, committment and dedication from his leadership,” Lovelace continued.
Following the recitation of the proclamation, Lovelace presented a key to the city along with the framed proclamation to Jackson.
Jackson was joined by members of his current team along with other supporters in attendance at Monday’s recognition.
Also during Monday’s meeting of the council:
• approved a proclamation naming May as Mental Health Awareness Month in the city;
• approved the vacation of an alley to make way for the proposed new facility of the Brewton Medical Center Pharmacy;
• approved resolutions for reports of Municipal Water Pollution Prevention for the Brewton Lagoon and North Brewton Lagoon completed for submission to the Alabama Deopartment of Environmental Management in May;
• heard from Lovelace on the appointment of Beulah Mason and Billy Earl Cook to the Housing Board;
• approved Earth Day Activities as described by Councilor Joe Watson.
The Brewton City Council typically meets the second and fourth Monday’s of each month. Meetings are open to the public and begin at 4:30 p.m. in the council chambers inside Brewton City Hall on Douglas Avenue.