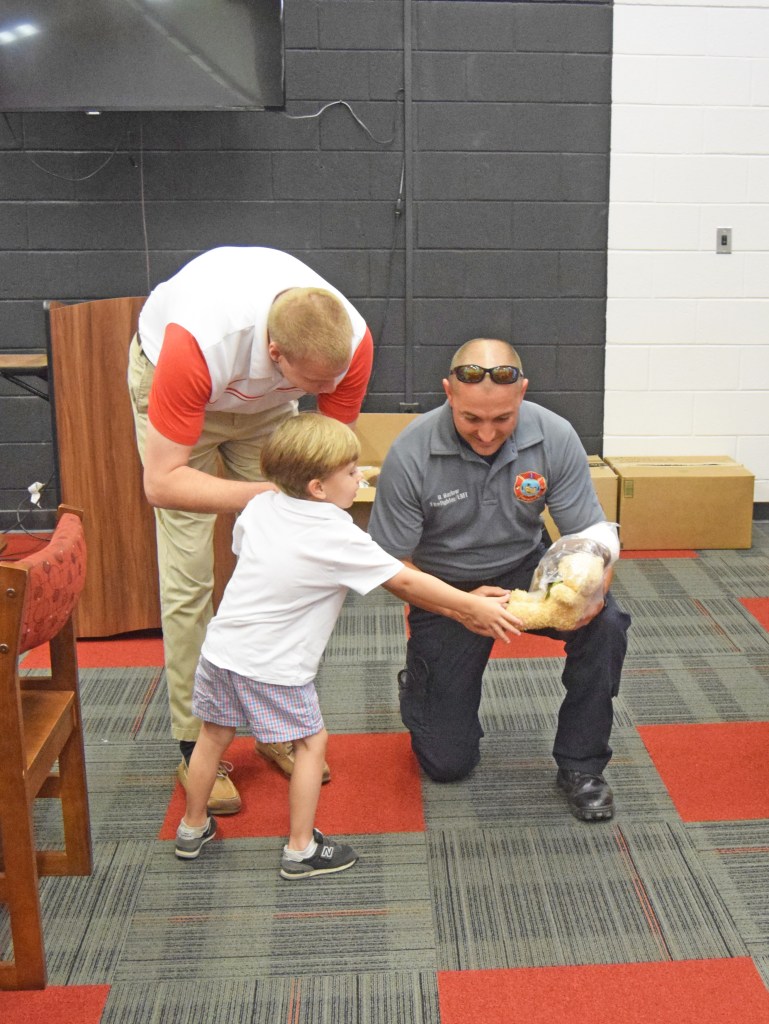 A scary situation for a local babysitting grandmother was the event that put a fundraising partnership into place at T.R. Miller High School.
The story surrounding the incident and subsequent fundraiser, was retold by TRM SGA sponsor, Tammy Jones.
According to Jones, former counselor and teacher at T.R. Miller, Becky Edge, was taking care of her three-year-old grandson, Max in January. During the time the two were together, Max somehow locked himself in a bedroom. Although Becky tried to open the door and get to Max, the door refused to open. After a few tense moments, the grandmother made a call to 911 and members of the Brewton Fire Department were dispatched to assist.
After Max was safely out of the room, the firemen told her that they once had Teddy Bears to offer children when they were upset, harmed or scared, but no longer had any to offer the child. Becky, always thinking like a counselor, decided to reach out and suggest the SGA raise money to provide first responders with Teddy Bears for children facing difficult situations.
After some thought, Jones put the SGA members to work along with the help of the Peer Helpers group at TRM under the sponsorship of Heather Cook.
Students in the two groups sold Teddy Grams for a week accumulating almost $1,300 in the process. That amount of money was sufficient to purchase 117 Teddy Bears to be distributed among local firemen, policemen and sheriff’s deputies to be used with children who receive services from either of the departments.
“The students did a phenomenal job,” Jones said. “They sold Teddy Grams to friends, family, teachers, anybody they could. In a week’s time they raised enough money to purchase 117 bears.”
T.R. Miller High School Principal Chuck Alford thanks the first responders on hand for the presentation.
“We rely on ya’ll for so much and you come to bat for the students and children, not because it’s your job, but because you care,” Alford said.
Members of the TRM Student Government Association are Houston Hartley, Mackenzie Thomas, Grayton Coale, Sarah Hartley, Caroline Williamson, Colby Dehoff, Emma Clair Hayes, Sydney Lucas, Jeffery Walker, Madison Butts, Dustin Godwin, Jennings Ruzic, Adam White, Ty Black, Catherine Brewer, Jordan Jones, Serenity Mitchell, John Robert Jernigan, Dominick Milligan, Logan Pettis and Aneciya Stallworth.
Members of the TRM Peer Helpers group are Colby Dehoff, Sarah Hartley, Emma Clair Hayes, Landon Lindsey, Emily Morgan, Becca Richardson, Ansley Till, Abby Terrell, Diamond Bradley, Grayton Coale, Jayden Mitchell, Bracken Pettis, Caleb Ray, Jennings Ruzic, Elora Waters, Adam White, Kinsley Byrd, Serenity Mitchell, Belle Walker, Braxton Winstead, Brayden Bakare, Meg Fountain, Monessa McMillan, John Moore, Sohan Patel, Madelynn Sasser and Kylee Walton.
Members of the Brewton Police Department, Brewton Fire Department and Escambia County Sheriff’s Department were on hand for the presentatio of the bears last week. The bears will be kept in vehicles of the respective departments to be used in the event that a child is traumatized by an emergency event.
Each of the departments respresented will receive 39 bears for use in their responses throughout the community.