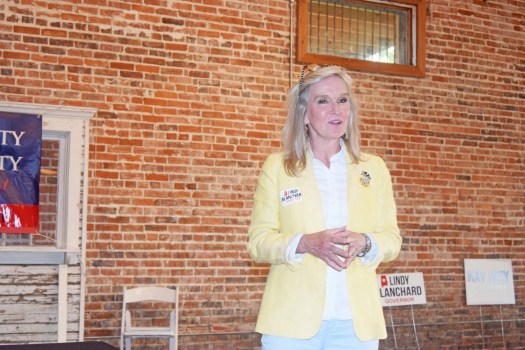 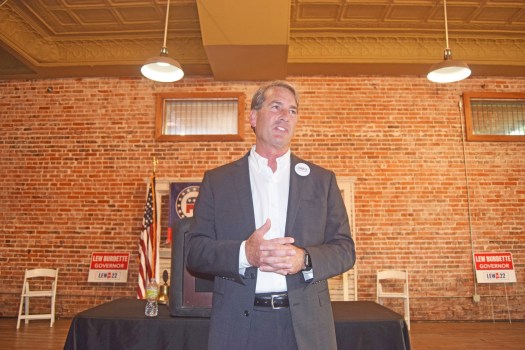 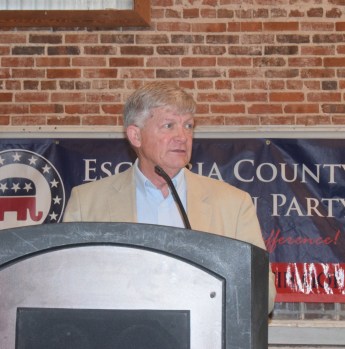 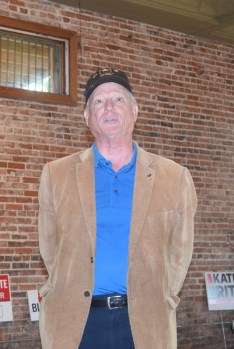 A larger than normal crowd was on hand Monday for the regular meeting of the Escambia County Republican Party.
Alabama Gubernatorial Candidates Lindy Blanchard and Lew Burdette spoke along with Senate candidates including incumbent Greg Albritton and challenger Stephen Sexton.
Both Blanchard and Burdette spoke about what they hope to accomplish if successful in gaining the state’s top position as govenor.
“I am a mathemitician,” Blanchard said. “And the numbers are not looking good. In 2020, Alabama’s number one trade partner was China.”
Blanchard said her plan is to change the trajectory of the state and move forward without being obligated to contributors.
“I’m using my money in this campaign so that I can move forward in the state,” Blanchard said. “I won’t be connected at the hip before I make a decision. Just follow the money. I’ll be a business partner for you.”
Burdette said he he believes limiting political campaign contributions may be a key to keeping state government in line.
“Alabama is the fourth most politically corrup state in America,” Burdette said. “I want to work for complete transparency in campaign contributions. All it does is buy favor and influence in Montgomery. I believe in limiting campaign contributions to $10,000. Thank God I am not a politician. I will work for changed for every Alabamian.”
Senate District 22 is currently lead by Greg Albritton who has been serving in the position since his election in 2014. He is being challenged for the position by Stephen Sexton, a resident of Bay Minette.
Albritton addressed the group Monday night and explained that Alabama’s financial security is strong.
“Alabama has the largest revenue we’ve ever had,” Albritton said. “That happened because of what Republicans have done. There has not been proration a single year since the Republicans came into power. Alabama is not worried with the recession. Alabama is strong financially. Alabama is strong politically and Alabama is strong because of you.”
Sexton said he hoped to win the Senate seat to fight for the people in District 22.
“I am here to give assurance to the people of Escambia County, that if elected, you will not be neglected,” Sexton said. “The Alabama Legislature has failed the people of Alabama. You won’t be forgotten when I’m elected next Tuesday.”
Representatives for Alabama Governor Kay Ivey and Senate candidate Mo Brooks were also on hand at Monday’s meeting addressing those gathered regarding the candidates they represented.
Republican candidates running for local offices were also on hand and briefly spoke during the meeting.
Candidates vying for the position of Escambia County Commissioner for District 3 were on hand including incumbent Scottie Stewart and challengers Billy Blair and Larry White.
Escambia County School Board members Cindy Jackson and Sherry Digmon were in attendance as well.
Escambia County Sheriff Heath Jackson also addressed the Republican group and encouraged a united front no matter the election outcome.
“When Tuesday’s over, get it together and move foward,” Jackson said. Win or lose, there are people who supported you and you owe it to them.”