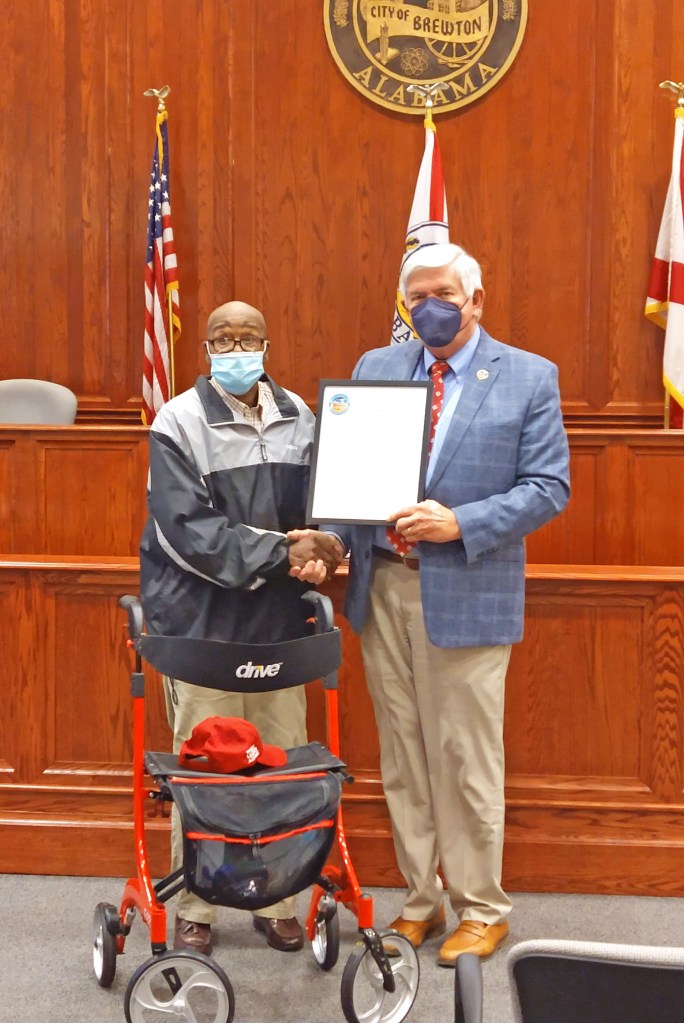 Although no time line for construction has been revealed, City of Brewton officials confirmed a new business set for Douglas Avenue.
Sonic Drive-In will occupy the space now cleared between Walgreen’s and Main Street Urgent Care on Douglas Avenue.
The fast-food, drive-in restaurant has locations in Atmore, Monroeville and Andalusia. The addition of the Brewton location will take a considerable amount of time to complete. No specific architect plans or details have been revealed to the City of Brewton as of this week.
In other business, the Brewton City Council approved a rezoning recommendation allowing for a new construction for United Bank on Douglas Avenue.
The property rezoned from residential to business is located at 1515 Douglas Avenue. No time line was provided for the construction of the new United Bank completion.
Also, during Monday’s meeting the Mayor and council recognized a local hero by presenting a proclamation to honor Robert Hardy.
Hardy, who served on the board of commissioners with the Brewton Housing Authority for more than 30 years, serving much of that time as chairman. Last month, the conference room at BHA’s offices was renamed the “Robert Hardy Conference Room” in honor of the advocate for fair and decent housing.
The Council also presented a proclamation to preserve and protect Heritage Trees in the community. Noting specific trees on Belleville Avenue, T.R. Miller campus and trees on the campus of the former Southern Normal High School, the proclamation will offer additional protection for those tree deemed a part of the community and its history.
In other business, the council:
• approved a grant agreement with ADECA for Alco Emergency Sewer Program in the amount of $500,000;
• approved the purchase of a welding machine for the Utilities Department at a cost of $25,000 to Airgas USA of Brewton;
• appointed a nominating committee for Brewton Development naming David Jennings and Charyl Barton to the committee;
• heard an update from the Brewton Housing Authority;
• approved the use of Brewton’s three parks for the upcoming Murder Creek Mud Run set for June 4;
• appointed a review committee to address the University of Alabama Proposal concerning city-owned property at Dogwood Hills with Carrie Brown, Feast Broughton and David Jennings named to the committee.