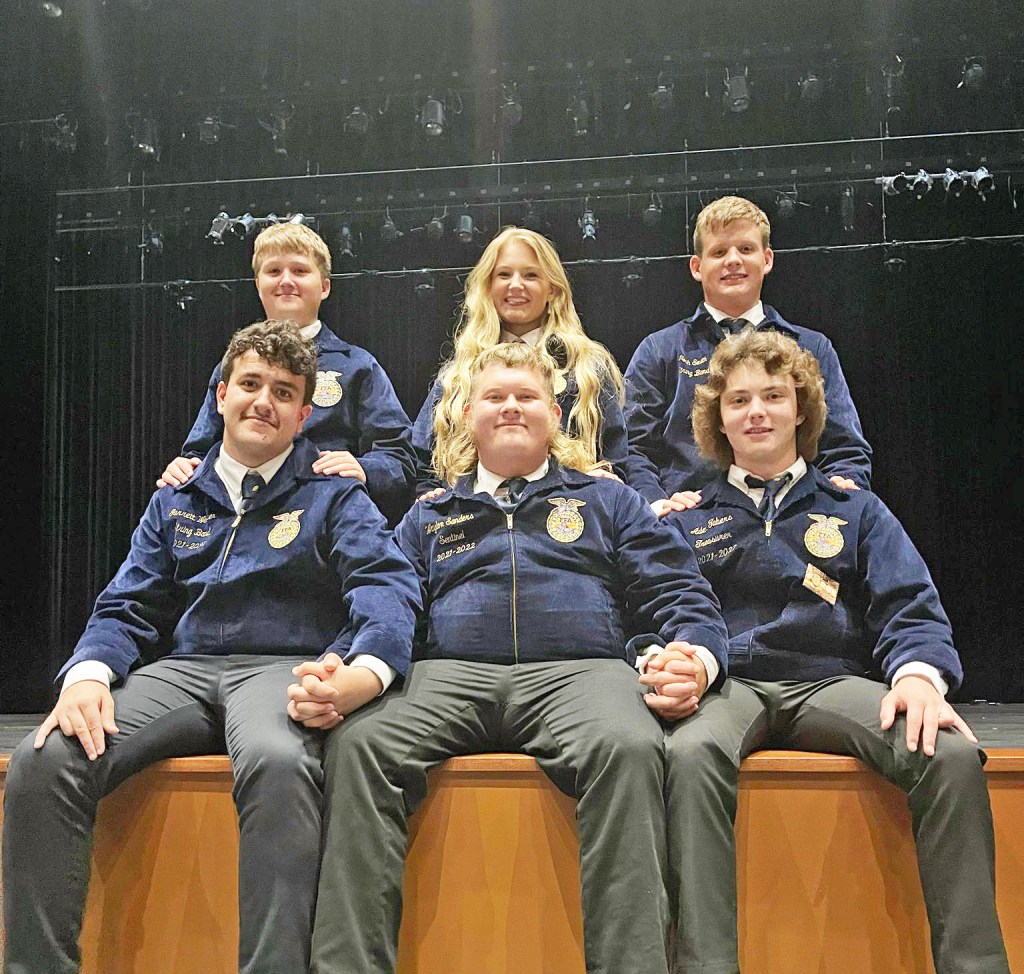 Members of the W.S. Neal FFA Stringband pose for a photo following their performance that took top honors in the state — the first for the band, and the first for a W.S. Neal group at the State FFA competitions held last week.

With a 25-year gap in first place state competition banners for the W.S. Neal High School FFA group, the streak ended in a big way last week at Alabama State FFA Convention held in Montgomery.
That coveted first-place banner came after a performance by the String Band from the East Brewton school.
Made up of members Waylon Sanders, Aden Tabors, Garrett Weaver, Paige Sindelar, Noah Smith, and Gabe Hudson, the band has been working toward this prize as a group for some time.
WSN FFA Advisor Joshua Coleman said the FFA Chapter members at the school worked hard in several categories of competition last week, with the string band taking the top award for the group.
“They have worked hard to get here,” Coleman said. “The last time W.S. Neal won a first place state banner was in 1996.”
The chapter also had participants in other competitions that brought a few extra banners to East Brewton.
India Dees finished in the top six in Prepared Public Speaking; John Braxton Rhodes finished third in the Extemporaneous Speaking event; Sadie Stone, Anna Hawthorne, and Marissa Baker finished sixth in the Vet Science category; Kayla Yoder, Justin Dubose and Harley Wilson finished sixth in Meat Evaluation.
A cherry on the top of the awards list was having John Braxton Rhodes named as State FFA Secretary for the 2022-23 year.
Six students from the group earned their state FFA degrees during the convention. Those earning the distinction were Waylon Sanders, Larah Berry, Aden Tabers, Taylor Stacey, Melanie Martinez and Sadie Stone.
Coleman said an award on Thursday put the chapter in good company across the state with a gold distinction.
“On Thursday we were recognized as a gold chapter in the state,” Coleman said. “That’s the first national chapter award that we’ve earned since 1976, and then it was bronze status.”
Coleman said the criteria for earning a bronze, silver or gold status is challenging.
According to State guidelines, every chapter that meets the minimum quality chapter standards and completes Form I will qualify as a state superior chapter. To do this, chapters need to conduct one activity related to each quality standard in addition to meeting the minimum criteria outlined in the National Quality Chapter Standards. Chapters receive a superior chapter certificate each year they achieve this level. The chapter will also be eligible to compete for their state’s Gold, Silver and Bronze chapter awards.
To compete for state gold, silver or bronze awards, chapters must qualify for the superior chapter award and complete Form II. Chapters use Form II to report goals, plans of action and results/evaluation on three activities for each division. State judges rank the chapters as gold, silver or bronze based on the rubric. Chapters receive a multi-year plaque and yearly plaque inserts, commonly known as spurs, specifying the level achieved each year.
For photos from last week’s performances and honors, see page 12 of today’s edition.