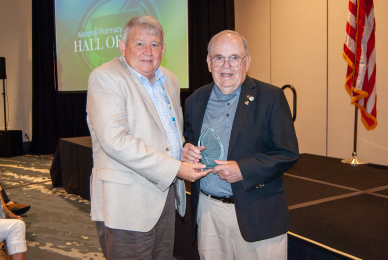 On June 13, 2022, William James “Jim”  Justice of Flomaton was inducted into the Alabama Pharmacy Hall of Fame at the Alabama Pharmacy Association (APA) 141st Annual Convention and Trade Show, held at the Lodge at Gulf State Park in Gulf Shores, Alabama.
Jim was born May 8, 1939, in Flomaton, Alabama, the youngest child of Conway and Willie Lou “Bill” Justice. Conway had opened Justice Rexall Drug Store in Flomaton in 1929, having to deal with the depression and the great south Alabama flood that same year. These difficulties didn’t scare their children from the profession and all four graduated from Auburn’s School of Pharmacy. Jim had started working in the pharmacy at the tender age of six washing dishes and behind the soda fountain.
Justice loved the idea of practicing in a small-town pharmacy and came back to Flomaton to work with his father, eventually becoming president of Justice Rexall Drug in 1964. Understanding early how pharmacy was changing, he purchased Escambia Drug of Atmore in 1983. During this period, he became extremely active in pharmacy organizations and cooperatives and was elected to serve on the APCI board and was one of the founding directors of API. He also served on several APA committees and held the office of President in 1989. In 1999 Jim was elected by his peers to serve on the Alabama State Board of Pharmacy, completing a five-year term in 2003.
Along the way from 1995 to 2000, Justice purchased six pharmacies with partner and friend Danny Cottrell, retiring from ownership in 2003. He continued to practice in different settings including Walgreens, Mobile County Health Department, and Buy-Rite Drugs in Atmore, and today, works occasionally providing relief coverage. Over the years, the number of pharmacists Jim has helped enter into community pharmacy ownership is tremendous, and he has mentored many of today’s leaders.
Civic responsibility has led him to serve on both the Flomaton and Atmore Chamber of Commerce, the Atmore Rotary Club Board, the Flomaton Lions Club, and the Atmore Country Club. He has been treasurer of the Flomaton Methodist Church for over two decades and currently serves on the Flomaton Library Board. The mayor recently appointed him as chairman of a committee that is adopting land use and development ordinance for Flomaton. Serving on the Bank of Atmore board from 1982 to 2016, he has overseen its growth to United Bank with 21 branches, retiring from his duties with board member emeritus honors.
Awards received include the 1954 Eagle Scout Badge, 1989 NARD Pharmacy Leadership Award, 1989 Merck Award for Outstanding Achievement in the Profession of Pharmacy, 1989 APA Distinguished Service Award, and the 1989 McKesson Leadership Award.
“Countless pharmacy owners from across the state will tell you that they wouldn’t have been successful if it hadn’t been for Jim’s help and guidance,” said Louise Jones, APA executive director. “APA is pleased to be able to recognize his work through his induction into the Hall of Fame.”
Married to his high school sweetheart since 1960, Jim and Patsy have two children (one a pharmacist), four grandchildren, and two great-grandchildren. Committing to a life of service many years ago, Jim Justice has made a large impact through small-town pharmacy.
The Alabama Pharmacy Association is a nonprofit professional organization with over 3,000 members statewide. The APA offers continuing education programs for pharmacists and pharmacy technicians, and members take a leading role in lobbying for pharmacy at the state and national level. The APA was established in 1881 and is the oldest professional organization for pharmacy in the state. APA members represent all practices of pharmacy and are committed to their profession and their patients.