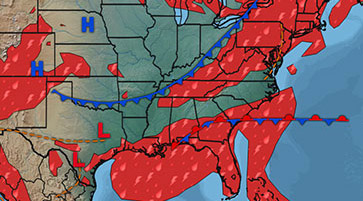 It’s not unusual to see rain in the forecast this time of year, but the expected rainfall over the next week is a little out of the ordinary for summer showers.
Local meteorologist Spinks Megginson with RedZone Weather, has a forecast that calls for several inches of rain over the coming days.
“We will see higher rain chances later this week into the weekend as a tropical system develops in the northern Gulf,” Megginson said Tuesday. “We continue to keep a close watch on an area of disturbed weather in the northern Gulf that has a growing potential of becoming a named tropical storm later this week or this weekend. Even if formal development does not happen, heavy rain and flash flooding will be concerns later this week.”
Megginson indicates that the Brewton area could see as much as six inches of rain in just a few days this week.
“The latest forecast calls for 10 to 12 inches of total rainfall in the next five to six days near the Alabama and northwest Florida beaches,” Megginson said. “Farther inland, upwards of 3 to 6 inches of total rainfall will be possible. Flash flooding may quickly become an issue across the region later this week.”
Flash flooding can cause significant issues especially in areas prone to flooding.
“When heavy rainfall sets up and repeats over the same areas, flash flooding will quickly become a concern later this week,” Megginson said.. “This heavy rain event will happen in areas where soils will already be fairly saturated due to the daily deluge of pop-up storms that will have happened this week. I am particularly concerned about the flash flood setup later this week in coastal communities and in areas south of I-10.”
Rains will continue throughout the weekend, Megginson said. And, plans should be made accordingly.
“Saturday and Sunday look particularly wet as heavy rain and thunderstorms develop, partially driven by the potential for tropical mischief in the northern Gulf of Mexico,” Megginson said. “Even if the system does not become a classified, named tropical storm, prolific Gulf moisture will stream in from the south, paving the way for scattered to numerous showers and thunderstorms each day.”
The Hurricane season is just getting underway with this system being the first chance at having a named storm. This system is continuing to receive notice from the National Weather Service and will be upgraded as the severity warrants.
For the most up-to-date local information, be sure to download the free RedZone Weather app to keep up with all the latest information on the world of weather in south Alabama and northwest Florida.
redzoneweather.com/app is the link for the free download. Once you have the app downloaded to your iOS or Android device, be sure to visit the Alerts tab (lower right corner) and tap the large, yellow Alert Settings button to customize the alerts you receive.