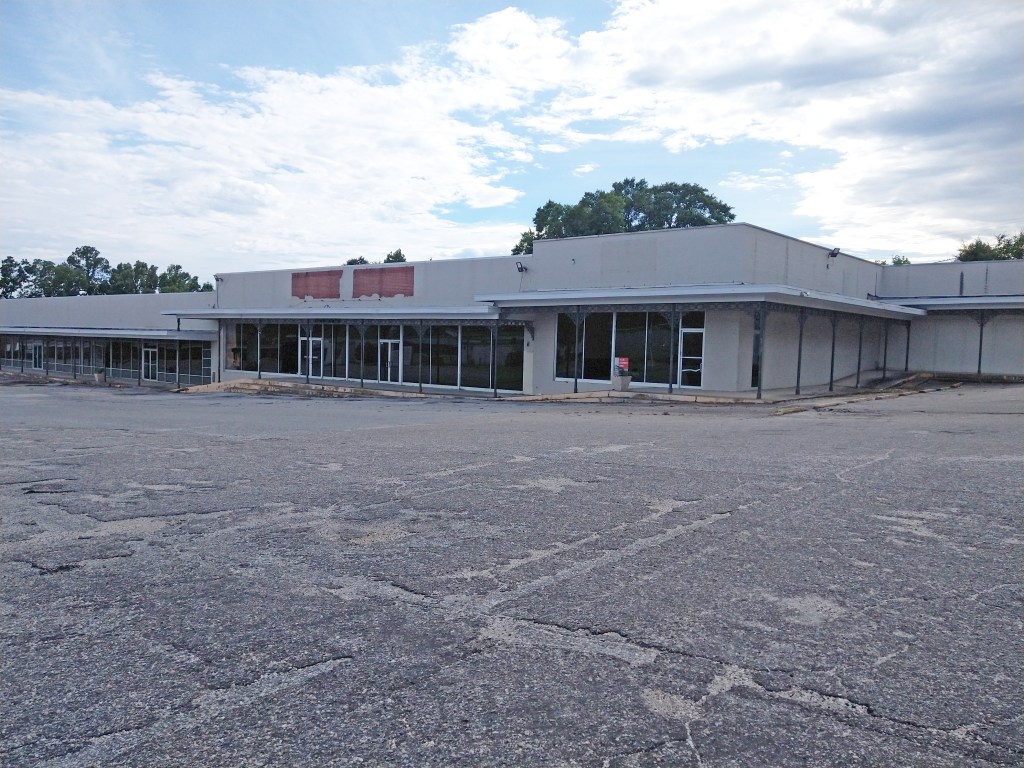 For more than two years, the Brewton City Council has been working on having a portion of buildings at the Brewton Heights Shopping Center either repaired or removed.
That process has involved contacting owners — and now the mortgage holder — to facilitate removing the nuisance building from the city.
Brock Holt, risk management administrator for the city, told the council Monday that ample opportunities have been given to the owners of the property.
“We’ve been dealing with this issue for some time now,” Holt told the council. “The west wing is the old row of spots that housed Sears, The Pickle Barrel and ServePro was there. In May, we contacted the two owners of property and the mortgage company to respond to our request to discuss the issues. We have had no response to those requests.”
Holt said the building had become a public nuisance and asked the council to move forward with eliminating the problem building.
Holt also addressed questions from the council concerning the other buildings in the center area.
“The other buildings in the center are not included in this notice,” Holt said. “The section where Todd’s Bakery could be repaired and usable, but that back row of buildings is not in a situation where repairs would make it usable.”
The owners of the building have had ample time to either make repairs or enter into a discussion with the city to find a resolution for the property.
With no response over the past several months following issued requests for consultation with the owners, the city approved a resolution calling for the demolition of the west wing of the shopping center. The resolution calls for the property owners to facilitate that demolition in a timely manner.
In other business, the council also approved a resolution to hire D.H.I. Services for the purpose of demolition and repair of the ceilings at the Brewton Animal Control’s facility on South Boulevard.
City Clerk Brooke Hartin told the council the timing is perfect to have the work done at the building.
“Animal Control is closed now for some repairs and it’s the perfect time to handle this part of the remodeling there,” Hartin told the council. “The work will include taking out the existing ceiling, putting in new light fixtures and replacing the ceiling. They will paint and seal the new ceiling to complete their work.”
Hartin told the council the ceiling at the facility will be replaced with wooden ceiling tiles that will be painted and sealed to resist water.
The cost of the project was approved at a bid of $30,022.
Hartin told the council that this project of replacing the ceiling is above and beyond what has been deemed necessary to bring the Animal Control facility up to better standards.
“This is over and beyond what has to be done,” Hartin said. “But with the building closed, this is a good time to do this work.”
The council approved the project bid and work is expected to begin this week, Hartin said.
Also during Monday’s meeting, the council:
• Presented a resolution in honor of Florence H. Rowser’s 96th birthday in recognition of the life-long work in the community performed by the honoree;
• Approved the appointment of Stacey Hines and Patrick Henry to the Industrial Development Board with their terms to begin immediately;
• Heard a report from Claudia Lee on the participation in the annual Family and Friends Day held last weekend at Jennings Park. Lee told the council that more than 300 people were on hand since that was the number of people served from the food station by 1 p.m. on event day. Lee thanked the Council for their support of the event and encouraged their support for the event in the future.