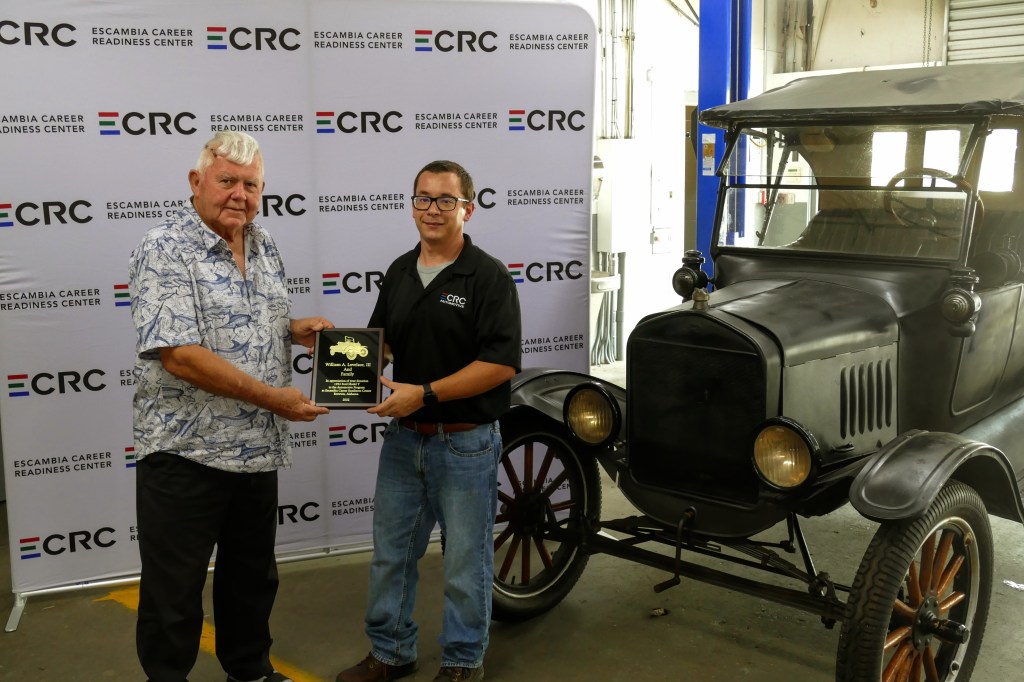 The Model T created by Henry Ford in the early 1900’s is well known for its mass production, reliability, and the freedom it provides to its drivers. Escambia Career Readiness Center (ECRC) can now participate in the history of the Model T thanks to William Lovelace III donating his beloved Model T to the ECRC Automotive Program.
ECRC is very thankful for William Lovelace III and family. This particular Model T could have made it to a museum or on a marketplace website being sold. Instead, Mr. Lovelace wanted to share his passion of the Model T by allowing younger generations to share in the pride of ownership.
Nick Lovelace, son of the contributor said the family made the donation with hopes students would love the history of the vehicle.
“The Model T was donated to the Escambia Career Readiness Center in June of 2022 with the hope that future generations of young men and women in Escambia County would be drawn, much like he was, to the history of American automobiles and the mechanical trades,” Nick said.
William “Buddy” Lovelace was born in the family home on Belleville Avenue in Brewton, on August 21, 1939. Buddy graduated from T.R. Miller High School in 1957, While at T.R. Miller, he lettered in football, basketball, and baseball and was in the 4H Club.
During that time, he worked at the Texaco service station on Douglas Avenue owned by Mr. Aubrey Langham and later the Pan Am station on Evergreen. His first car was a 1951 Dodge Coronet 4-door sedan which led to his passion of all things mechanical. Buddy joined the Army in 1958. When he retired a second time to Navarre, Fla. In 2005 he purchased the 1923 Model T Roadster from a private owner in Pensacola.
ECRC Automotive Students will make sure the vehicle is mechanically sound and ready to drive in parades and participate in upcoming car shows. Students will work to build a presentation sharing the history of the Model T and the process of working on it at ECRC.
If you or someone you know would like to share your automotive passion by donating to the Model T project, please contact Mr. Thomas Fischer, Automotive Instructor at ECRC.