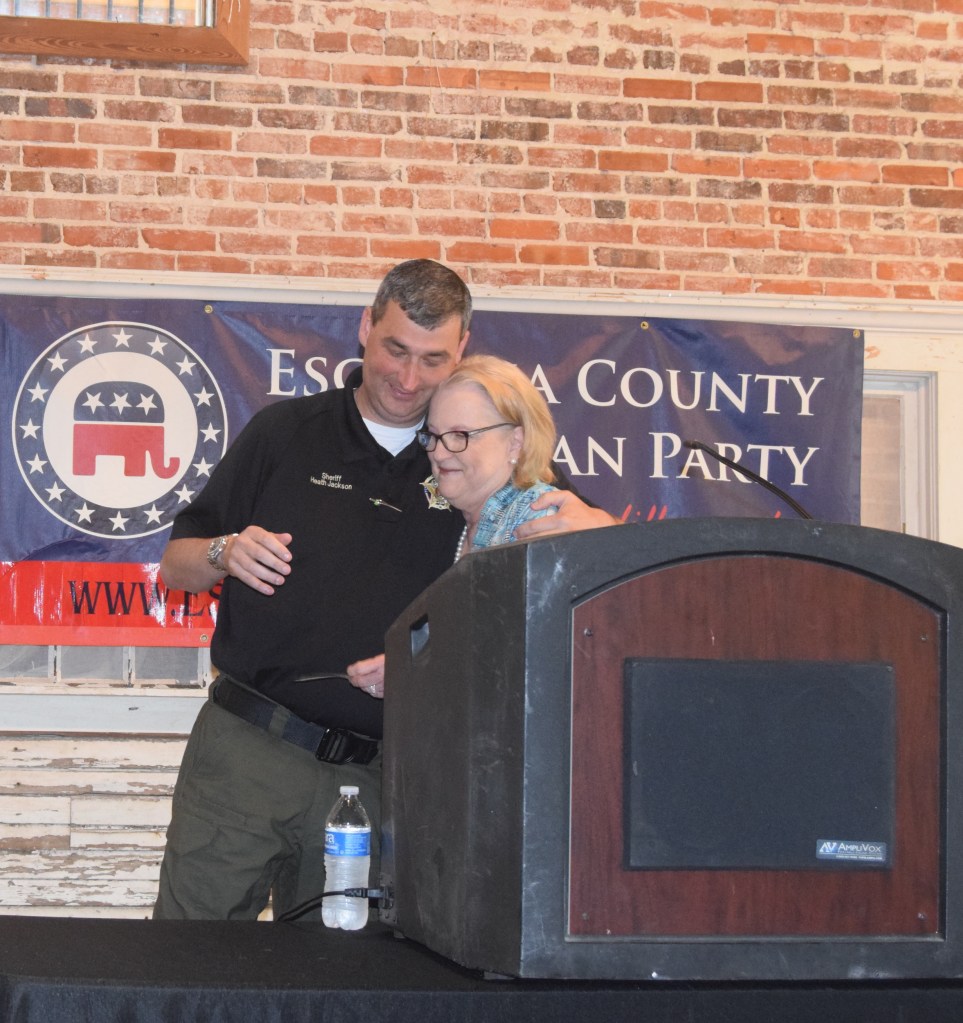 With the Nov. 8 general election just a little over six weeks away, the Escambia County Republican Party met Monday to provide important information ahead of the general election.
Jackie Gay, local chairwoman for the group, expressed the need to make sure the election in Escambia County is secure.
“We have filled all of our poll workers but still need some poll watchers,” Gay told the group. “We need to have poll watchers in some specific areas just to help ensure there are no issues with this important election.”
Gay also took the opportunity to present incumbent Republican Sheriff Heath Jackson with funds to help with his campaign expenses. Jackson is facing democratic challenger Shaun Golden for the sheriff’s seat in November.
“He came to me when he was 29 years old saying he wanted to be sheriff for the county,” Gay said. “It took him a few years, but I knew he would make it happen.”
Jackson accepted the check from the Gay and was surprised with the show of confidence in the upcoming election.
“I didn’t expect this at all,” Jackson said receiving the contribution. “Anybody on the republican ticket in this county wouldn’t be here without this party.”
Jackson, who is seeking reelection as sheriff for Escambia County, said he is proud to be a Republican and appreciates the support from other Republicans throughout the county.
“When I ran, I was told I would never win as a Republican,” Jackson said. “I would rather lose as a Republican than win as a Democrat. Every month at these meetings I see that there are people in this room who blieved in us when nobody else did. When you need me I’ll be there. I’ll never embarass you as your sheriff. If you call, I’ll be there.”
Circuit Clerk John Robert Fountain also addressed the group to explain the timing and rules for absentee voting in the November election.
“The absentee voting period opened last week and we have already received a few applications,” Fountain said. “We have the applications in our office that can be picked up in person or can be mailed upon request.”
Fountain said that absentee voting for the Nov. 8 general election has a few dates that are important for those wishing to vote absentee.
The last day for requesting an absentee ballot is Nov. 3 with all ballots returned by Nov. 7 in person or Nov. 8 by noon by mail.
Applications for absentee ballots are available online through the Secretary of State’s website or by visiting the Circuit Clerk’s office at the Escambia County Courthouse.
To download the application, visit sos.alabama.gov and look for the elections/absentee voting tabs.