Garrett among veterans on honor flight 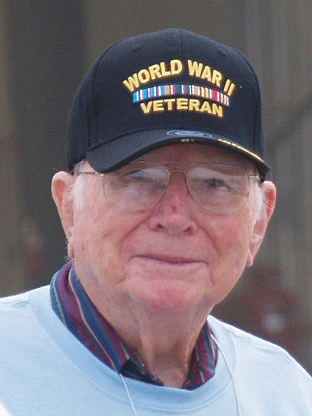 A trip to Washington, D.C., on an honor flight was the “icing on the cake” for Evergreen native and World War II veteran Ralph Garrett.

Garrett was part of the Covington Regional Honor Flight Saturday. He joined some 115 passengers on a chartered 737 Saturday morning, despite a fog delay, to see the World War II and Korean memorials, Iwo Jima memorial and Arlington National Cemetery.

“It was a wonderful trip,” Garrett said. “We left Andalusia Saturday morning a little late due to the fog and had a wonderful air crew on the plane. There was a quarter of a mile visibility before taking off of the Andalusia runway. The runway was not long enough to take off with all the passengers and fuel so we had to go to Montgomery. From there, it was about an hour and 45 minute flight to Dulles International Airport.”

Garrett said when they got off the plane in Washington, there were about 150 veterans and other people waving flags for them.

“We then got on buses and there were about 52-53 veterans of the total 114 passengers on the plane,” Garrett said. “The rest were guardians of the vets, and my son and daughter went with me. We had a wonderful time. We got on the buses and saw the World War II memorial. It’s a wonderful site for me as I am a vet of that war.”

“I went to India, but most of my time was in China,” Garrett said. “I was in radio operations, or static chaser as they are called. I spent 19 months at an Air Force base in North China. After the war was over, they shuttled us back. After we secured Burma, they sent a B25 bomber to our aircraft. That is a twin-engine small bomber. It had a 75mm cannon on the nose and on each side of the cannon were four .50 caliber machine guns. I had never flown in that as I was on the ground forces. Every time they would fire the cannon control, it would recoil and the airplane would completely stop.”

Garrett’s group in the military would get any kind of information for the intelligence group and they would decode and radio the information back to headquarters.

“After we came home, we were home but had no work,” Garrett said. “I tried to find employment and in 1947 I got a job with Southern Bell Telephone Company. I worked there for 39 years until Dec. 31, 1985, and after that, I have been happy ever since. This past Saturday was the icing on the cake though. I got the chance to fly with the honor guard. It would take three days to see what we got glimpses of.”

Garrett said he would like to thank the Covington County Commission, the Andalusia City government, and the other business in the Covington area that allowed them to go.

“It did not cost us a nickel, not even a penny,” Garrett said. “The guardians paid their way. But we had a wonderful time and I am thankful I got to go. I would like to go again and take a week to see what I saw in three hours.”

The only thing that bothered Garrett was after the trip when the group returned home.

“There was no media there when we got back,” Garrett said. “I personally don’t think they care about the veterans of WWII. There was no newspapers or television people there. They care about all this other stuff, politicians and others, and we risked our lives to fight for this country.”