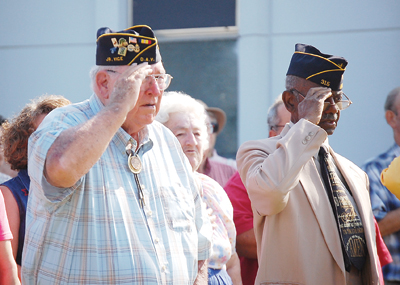 Residents will gather to honor the area's veterans on Monday for a Memorial Day service.

“Remembering those who gave everything” is the focus of a celebration set for Memorial Day at 9 a.m. on the lawn of the Escambia County Courthouse.

Mike Hanks, a member of Post #79 of The American Legion, said the services scheduled for Monday morning is an annual event held at the Belleville Avenue site.

The event, co-hosted by the Veterans Memorial Committee and the American Legion, is one Hanks said is an important event for young and old.

“We want to encourage people to come out to this service,” Hanks said. “We especially want people to bring children to the event. We need to set an example for the next generation of how important it is to honor those who died for our freedom.”

Hanks said the holiday is an opportunity for citizens to take some time from their busy schedule to honor those who died in battle throughout the years.

“I realize that time is important and is precious,” Hanks said. “But, this ceremony is a way that we can show respect to those men and women who gave everything, including their time. And, they were doing it for me.”

A special portion of the ceremony will be the honor roll call, Hanks said.

“Charles Jackson (an American Legion member) will be doing our honor roll call,” Hanks said. “That is the point in the ceremony where each name that appears on the monument and others killed at war will be called out in order for us to recognize their sacrifices.”

Hanks said family and friends of fallen soldiers are invited to join in the service.

“As we call the names of those killed we ask if anyone who is related to or was friends with the deceased to join us at the monument,” Hanks said. “We want people to know there are loved ones and friends left behind to remember the sacrifice these soldiers made.”

Hanks also said the site of the memorial ceremony is nicer because of the location of the event.

“All of this started in 1988 when the current memorial site was completed in front of the (Escambia County) Courthouse,” Hanks said. “The first program there was Veteran’s Day in 1988. We are very lucky to have one of the most beautiful memorial sites in the state in Brewton. There are a lot of other nice memorials in the state, but we have one of the prettiest around.”

Hanks wanted to remind citizens the significance of Memorial Day and why it is important.

“Memorial Day is a day we honor those who served our country and lost their lives,” Hanks said. “The difference between that at Veteran’s Day is on Veteran’s Day you take the time to say ‘thank you’ to a veteran who fought in a war and is still living. That’s why this is so important. If we ever forget those who died for our freedom, we will never survive.”