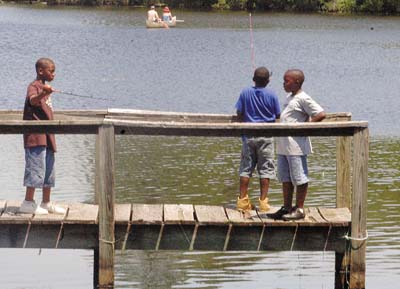 With a history that began nearly seven decades ago, the future of Little River State Park is in jeopardy.

Gary Cole, forester with the AFC, said finances over the past several years have caused his organization to question the feasibility of keeping the facility open as it is today.

“This land will always be accessible to the public,” Cole said. “Even if the park does close, the walking trails and other aspects of the forest will remain open to the public.”

Cole said the increasing cost of maintenance on the property coupled with declining revenues and stretched budgets, keeping the park portion of the property is probably not likely to continue.

“We have had a shortfall in our budget and there are things at the park that need to be done,” Cole said. “Since we don’t have the funds to do the work and keep the park in its best condition, there is a real possibility the park will close.”

Cole said the park is only a small portion of the property currently being managed by the AFC.

“We have more than 2,000 acres in this park and forest,” Cole said. “We may not be able to maintain the park, but we will continue to manage the forest portion of the property. That’s why we know that a part of the property will be available for limited accessibility for the public.”

The 2,000-plus acres became property of the Alabama Forestry Commission in the 1930s when two families deeded the property for the purpose it is used for today.

“The two families, the Alger-Sullivan family and the Blackshire family, deeded the property to the Alabama Forest Commission under stipulation that the property be used as a State Forrest or State Park,” Cole said. “That has been the case since that time and it will continue to be that way. The property cannot be sold by the Commission. If that were to happen, the sale would not take place and the property would revert back to the families or their descendants.”

Cole said AFC officials are in negotiations with two groups that have shown an interest in managing the park portion of the facility.

“We are doing everything we can to see that the park stays open,” Cole said. “We are talking to two entities who have an interest in managing the park. Those talks are still going on, but chances are not great that that will happen. We’ve done just about everything we could do to put the park in someone’s hands to maintain.”

The AFC allowed the Alabama Department of Conservation’s Parks Division to lease the property several years ago. Cole said AFC looked for partners to help run the park in 2007.

“We took back the management of the park just 14 days after Hurricane Ivan came through,” Cole said. “A lot of trees were lost in that storm, so using timber as a way to help finanancially with the park isn’t possible.”

Cole said a recent survey of park users found that only about 30 percent of day-use patrons pay for services at the park.

“We do get most of the money for using the park from campers,” Cole said. “We did a check recently and found that about 70 percent of the people who come into the park for the day pay the fees posted for use.”

“We don’t want to see the recreation area closed at all,” Cole said. “But, our timeline gives us only to Sept. 30 to remain open unless something good happens.”