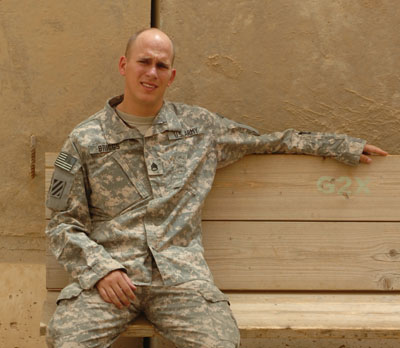 A Brewton native is finding out more about the Iraqi landscape than most people from Brewton will ever know.
U.S. Army Staff Sgt. Craig Briggs, a 1998 graduate of T.R. Miller High School, began his tour of duty with his military division in Iraq in April.
“I got to Iraq in April and will be here until October,” Briggs said. “We will be finished here in October and then I’ll come back to the states. I’ll be going back to Ft. Stewart, Ga.”
Briggs said the living conditions were not as bad as some might think, but it’s not like home.
“It’s a vast desert here,” Briggs said. “The trees are few and far between. It’s nothing like you’d see driving down Ridge Road or other roads in Brewton. It’s very desolate. Our living conditions aren’t too bad. Actually, it’s better here than what we had during basic training.”
Briggs spends much of his time indoors at work in position with signals intelligence.
“I never leave the office,” Briggs said. “I work all day gathering, sorting and scanning all the intelligence over here.”
Briggs began his military career when he decided to look for something else to do with his life.
“I graduated in 1998 and worked around Brewton for a while,” Briggs said. “I had a friend whose dad was in National Guard. He went into the military and left Brewton. I was working at Moore’s at the time and was looking for something to do. I decided then to join the military.”
Joining the military was a decision Briggs made is one that became more of a plan than a whim.
“The last contract I signed was for five more years,” Briggs said. “That will make 13 years total. I plan to retire from the military.”
Briggs married Heather Dantzler five years ago. The couple has one son, Christian Alexander. Although a long-term plan to stay in the military may be the best decision for now, Briggs said serving in Iraq has been especially hard on him — and his son.
“It’s been rough being away from my family,” Briggs said. “The thing that makes it bearable is Skype. That’s a way we can get on the Internet and be able to see and talk to our families while we are away.”
Briggs said the program has made being away from family better for anyone deployed outside the United States.
“These military programs make being away much easier than it would have been in the past,” Briggs said. “Through Skype I’m able to see my son and talk to him every night. He’ll know me when he sees me again.”
Briggs also praised another program offered by the U.S. Army that has been a source of comfort for him and his family.
“They have a program set up so that we can make a video of ourselves reading books to our children,” Briggs said. “When we get the video done, they send it and the book to our children. Now when my son has his book in his hands, I’m reading to him.”
Briggs said he hopes that the citizens in the United States won’t forget the work being done by the military and what a sacrifice the work is for every soldier.
“I hope that people will keep supporting us,” Briggs said. “I hope they remember that the men and women serving are from small towns just like Brewton. Fly yellow ribbons and keep us in your prayers.”
Briggs is a signals intelligence analyst in the headquarters for this division-sized task force of approximately 18,000 Soldiers, which is built around the 3rd Infantry Division, Ft. Stewart, Ga. The area of Iraq where his division is operating is roughly the size of the state of Georgia and contains familiar cities such as Mosul, Kirkuk, Baqubah, and Tikrit (Saddam Hussein’s former hometown).
— Lisa Tindell 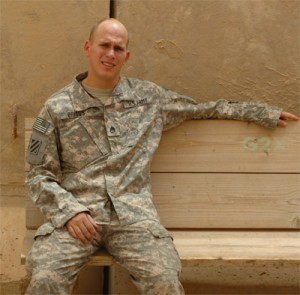