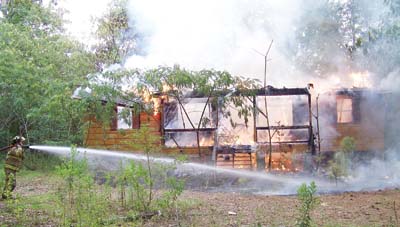 After two separate fires on Memory Lane on Thursday and Friday, July 22 and July 23, firefighters are treating them as suspicious fires.

Appleton Volunteer Fire Department Assistant Chief Chris Smith said there have been some questions raised about the Memory Lane fires, which occurred July 22 and 23, and three fires on McGougin Road a couple of weeks ago.

“We have had three suspicious fires on McGougin Road a couple of weeks ago,” Smith said. “They were very close together and that is very unusual.”

Smith said Appleton Fire Department officials have notified the Alabama fire marshal about all five of these fires, and they are still under investigation. Officials with the fire marshal’s office could not be reached for comment Tuesday.

“On July 22, at 8:40 we were called out to what they thought was a brush fire on Memory Lane,” Smith said. “When we realized that it was a house, we called in the Brewton Fire Department for help. It was an old uninhabited mobile home. There was no electricity at the house, and no lighting in the area. That and a few other things about the fire made it a suspicious fire.”

The very next afternoon, on Friday, July 23, at 4:20 p.m. the Appleton Volunteer Fire Department responded to a call near the same location on Memory Lane.

“We thought that it was just a flare-up from the fire the day before,” Smith said. “We were very surprised to see it was not the same building. This one was a house that set right next door to the first fire.”

Veterinarian Dr. William Thompson, who owned the house that burned late Friday afternoon, said no one was living in the house and he was planning to dismantle it and donate the lumber and materials. Thompson, who was at his nearby office when someone notified him about the fire, also said he believed the blaze seemed suspicious.

Appleton Volunteer Fire Chief Michael Tyler was out of town during the latest fires.

Tyler said that It seems all of the evidence points to foul play but they won’t know until the fire marshal makes his decision.