Imagine making a one-pot meal in 30 minutes — not in the comfort of your own kitchen, but in a high-pressured, live competition with other chefs.
That is the situation that will greet Wind Creek Chef Louis Chatham during a national competition in Anaheim, Calif., on Aug. 3.
Chatham, the executive chef at PCI Gaming, won the Southeast Region One-Pot Win a Lot Cooking Competition. Now he will compete for $1,000 and the national award at the 2010 American Culinary Federation National Convention.
The rules for this contest are simple: Make a meal, using Riviana Foods quick-cooking rice and a Dutch oven. It must be cooked within 30 minutes and must be cooked in one pot.
“That doesn’t sound hard,” said Chatham, “but it can be. If the ingredients cook for a different length of time, it can be hard to have them ready at the same time. Rice, which is our main ingredient takes longer than some other items. I plan on using shrimp with my rice and they don’t take that long to cook.”
The live competition will take place on the trade show floor at the the 2010 ACF National Convention at the Anaheim Marriott. Each chef will make four portions of his dish, one to show and the others for the judges.
“When I think of rice, I think of jambalaya,” Chatham said. “I will be preparing Creole Jambalaya Moderne and Shrimp Brochettes.
“When you come from southern Mississippi, you think of jambalaya.”
Chatham said he has his work cut out for him, but he will be bringing a secret ingredient from his new region.
“The judges will be looking for the taste, use of products, appearance and showmanship,” he said. “The largest ingredient will be rice, but we can put whatever spices we want to. I will also be using Conecuh sausage, which I love.”
Chatham has come a long way from south Mississippi where he was born. He grew up in Florida and found that he was interested in food and cooking. Over the next few years, he went from being a short order cook at Disney World to working with renowned chef Paul Prudhomme.
“I got my love of food and food preparation from my grandmother,” Chatham said. “I guess you could say that she was my inspiration.”
Although he cooks many things, Chatham said he really loves to grill at home. He also said he still loves the things his grandmother cooked, like cornbread, peas, corn and okra. 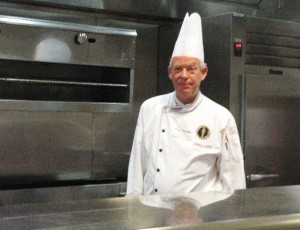