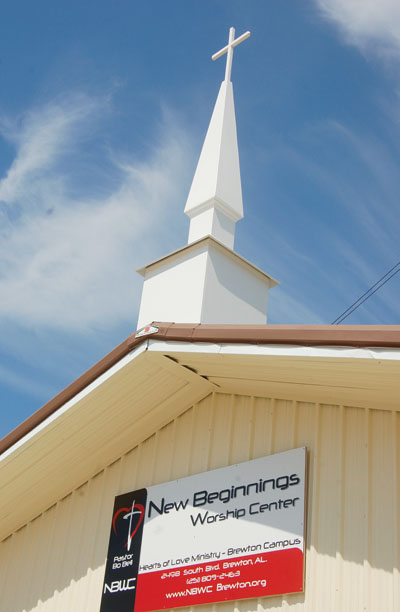 Bo Bell will soon be preaching where there was once a dance floor. Take a turn behind the bar, and you’ll be led to the nursery.

New Beginnings Worship Center will hold an open house Sunday from 4 to 6 p.m. in its new church — the former Ace of Hearts lounge on U.S. 31.

“God has taken back what is his,” said Bell, who also runs the New Beginnings faith-based drug and alcohol treatment center. “He’s taken old bars and turned them into churches. This is a place that used to be the devil’s watering hold, and he has turned it into living waters for our community.”

Bell said he expects 300 to 400 people on Sunday for the open house. Services begin Sunday, Sept. 26, at 10 a.m., and the church will hold Sunday evening services at 6 and Wednesday evening Bible study at 6:30.

Bell said a church has been part of his vision since he brought his ministry to Brewton about two years ago.

Remnants of the building’s previous life remain. Besides the bar in the sanctuary — now hidden by floral arrangements — there is a bar in the fellowship hall which will be used to serve food at functions. The office has been turned into the nursery.

But much of the building’s previous activities have been covered by symbols of new life, from a painting on one wall to coats of paint to mask the yellow tobacco stains on the ceiling.

“It took 110 gallons of primer to kill the smoke,” Bell said.

The sanctuary will seat about 200, Bell said, although it has the capacity for another 100 people, and he hopes for that many at services. There is also a youth room.

This is not the first former bar in Brewton to be turned into a worship facility.

Frankie Phillips has transformed a building on Douglas Avenue — one that used to be the American Legion Hall — into a new ministry as well.

New Beginnings church members — many of whom are participants in or graduates of the New Beginnings rehabilitation program — have done all of the work on the church building in about six weeks.

“God has placed me on assignment to help restore this community through Jesus Christ,” Bell said. “And we know that nothing is too hard through God. As Christians, we need to stop settling for anything short of victory over alcohol and drugs and crime in our city.”

Bell said he hopes the fight against drugs and alcohol will include other churches as well.

“It’s time we take responsibility for the shape our community is in spiritually,” he said. “What we have been doing is not working. It’s going to take the power of God to transform this city. Together we can win this battle.”