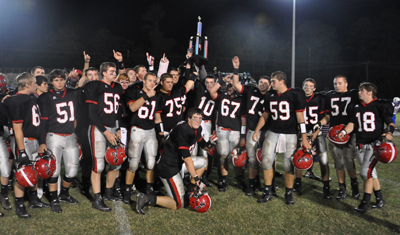 There were any number of formulas T.R. Miller could have used Friday night in its quest to win the “Battle of Murder Creek” over bitter rival W.S. Neal. After all, any formula that puts star running back Anthony Herbert in the mix usually works; so does simply pounding the front line with a stable of offensive lineman which dominates the trenches.
But if one mixes together a concoction that features a devastating attack of both running and passing — well, that formula indeed would be lethal.
After all, where there’s a “Wil” there’s a way.
In one of his finest efforts as the Tiger quarterback, senior four-year-starter Wil Riggs closed out his final regular-season game with a memorable performance in leading T.R. Miller to a 56-24 victory at Brewton Municipal Stadium.
Riggs was directly accountable for five touchdowns. He scored three times himself, on runs of 2, 2 and 34 yards and also connected with Jaren Jackson on touchdown passes covering 19 and 78 yards.
All told, Riggs passed for 205 yards on 8-of-11 attempts while his teammates were adding 319 on the ground (Herbert led all rushers with 148 yards on 21 carries and scored twice) as Riggs engineered his offense to 524 total yards on the night. And while Friday night was just another reflection of an offense that has hit on all cylinders most of the season, the 56 points dropped on the Eagles (0-10) brings to 145 the total points in the last three meetings of this long and storied series
“We had a great game plan offensively,” Riggs, who now has 12 touchdown passes on the year, said. “We knew they would fill the box with 8 or 9 guys trying to stop Ant (Herbert) so it obviously opened up the passing game for us. It was just a matter of execution.
“I’m glad that we were able to get the job done. But in order for that to happen, everyone has to do his job and it all starts up front,” Riggs said. “Because our offensive line did such a terrific job, it gave me a chance to find the right guy to throw to and our receivers were open a lot of the time and they made the catch. And even when they filled the box, we still ran the ball well. That’s a testimony to the job our linemen did tonight.”
Just how efficient was this offense last night? It scored touchdowns on eight of its nine possessions which helped early when W.S. Neal closed within 7-6 early and 21-12 near the half; the only reason the Tigers didn’t score on their ninth drive was because they were running out the clock at the end of the game. The offense was perfect on third-down conversions (5-for-5) and had 20 first downs.
And while Riggs, Herbert, Jackson and others may get a lot of the credit, it was not lost on those watching the game the effort of sophomore Jamaal Spears. From both sides of the ball and on special teams, Spears made his presence known. Whether it was several crushing blocks on offense, or the five special-teams tackles he made, that would have been enough of a game to remember. However, Spears also recorded seven tackles, broke up three passes and added an interception for good measure.
All of the above contributed to the win that was the 48th for T.R. Miller in the 66 years of this rivalry and allowed Wil’s dad, Tiger head coach Jamie Riggs, to extend his record in the series to 22-3. Miller finished the regular season with a 7-3 record and will travel to Daleville next Friday in the opening round of the AHSAA Class 3A playoffs as Region 1’s fourth seed.
“It’s good to look at the box score and see we scored every time we had the ball,” said Coach Riggs afterwards. “And we didn’t really think about Neal being winless coming in because we knew they would play their best game of the year against us, and they did.
“They really played hard so it was important for us to keep putting pressure on them. And I’m proud of the fact that every time they did something good, we always responded.”
To its credit, W.S. Neal had some success offensively as well. Sophomore quarterback Dylan Godwin had a hot hand throwing the ball, as he completed 12-of-23 passes for 196 yards and a touchdown. Damion Williams carried most of the load in the backfield, gaining 118 yards on 14 carries. Monterius Culliver scored three touchdowns and had 50 yards on 11 carries.
“I thought we played extremely hard tonight, but we just couldn’t get any stops defensively,” said W.S. Neal coach Kevin Jordan. “Offensively, we were pretty strong. We only punted once all night and Dylan threw the ball well.
“But Miller had a great game plan and they deserved to win. We knew we had to play an absolutely perfect game and take some chances to have a chance. That’s why we tried a couple of on-side kicks and squib kicks to try and steal a couple of extra possessions, but it didn’t work out for us. Still, I’m proud of our guys for the effort.”
As previously mentioned, the Eagles closed to within 7-6 on a perfectly-thrown 41-yard pass from Godwin to Ashton Elliott. Riggs answered with a TD pass of his own, a 19-yarder to Jackson, and a two-yard sneak to make it 21-6 with 9:51 to go in the half.
When W.S. Neal’s Culliver scored from the 4 to make it 21-12, the Tigers reeled off 21 unanswered points to put it out of reach at 42-12 just three minutes into the third quarter when Herbert scored from the 6, Riggs bulled in from the two and scrambled out of the pocket and down the left sideline for the longest touchdown run (34 yards) of his career.
The Tigers closed out their scoring when Riggs hit a wide-open Jackson for a 78-yard scored on third-and-11 late in the third and then freshman sensation Eric Maye added a 30-yard run to account for the final points of the game.