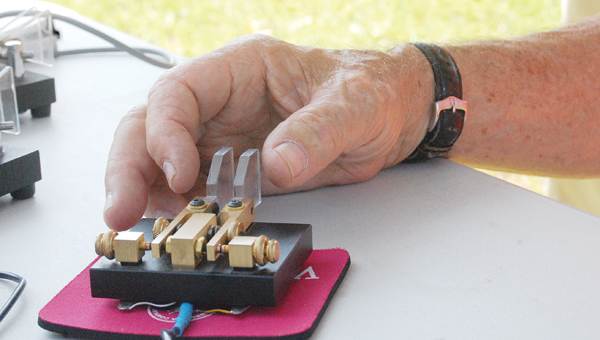 One of Johnny Miller’s favorite trips is into Conecuh Woods, where he can sit and practice what he admits is becoming a lost art: communicating via the dots and dashes of Morse code.

“I take my equipment in and sit down and eat lunch and do some CW,” he said, using the abbreviation for Morse code.

Miller, a member of the Brewton Amateur Radio Union, has been using Morse Code for 53 years.

“I wasn’t a radio operator in the Marines, but they handed me a radio one day and told me to use it,” he recalled. “After I got out, I got a Ham radio license.”

While Morse Code is becoming more obsolete — the military does not use it anymore — ham radio is still going strong, and the Brewton ham radio club is hoping to attract more members.

“We have 20 members here in Brewton,” Miller said.

“I went back bragging to my club about how friendly everyone was,” Conner said.

Conner has taught his sons Morse Code — he was even able to communicate with them after he had heart surgery by tapping out a message in his hospital room — but he also spends a lot of time speaking on ham radio.

“You meet friends that last a lifetime.”

Scott Hillman, a member of the Brewton club, said the group hopes to attract more young people to ham radio.

The Brewton club is able to give tests for ham radio licenses to those who are interested, and can help them study for the exam, Hillman said.

The group meets on the third Thursday of each month at the Brewton Public Library community house.