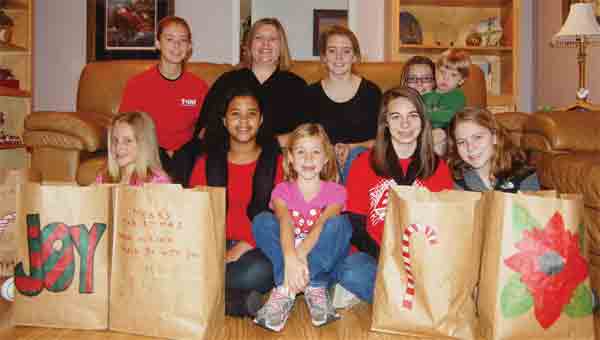 Ten of Barbara and Leon Reiss' 14 grandchildren gathered with their parents and grandparents Saturday to help decorate bags to wrap gifts for the elderly, part of the family's annual "Make You Feel Good" Christmas party.

More than a decade ago, as the grandchildren of Barbara and Leon Reiss tore the paper off dozens of Christmas gifts, their parents watched them toss the toys aside with disinterest.
“They said, ‘We already have that,'” said Debbie Bell, the Reisses’ daughter.
That’s when Bell and her siblings came up with the “Make You Feel Good Christmas Party,” a family event in which the three generations gathered to help make someone else’s holiday brighter.
That first year — 2000 — the family adopted some elderly residents, shopped for them and delivered gifts.
That project sparked a family tradition that has continued — and has taught the grandchildren more about the meaning of Christmas than their own gifts ever could.
“That year, at my parents’ house, they never once asked, ‘Where are the presents?'” Bell said.
Her niece Haley Reiss agreed. “We have each other,” she said.
Over the years, the project has evolved. Early on, Leon Reiss dressed as Santa Claus when they delivered gifts.
“You wouldn’t believe the expressions from the elderly,” he said, recalling how happy people of all ages were to see Santa Claus.
In recent years, the family has partnered with the Christmas Project, helping to wrap gifts for the elderly. On Saturday, the grandchildren decorated 92 bags with Christmas pictures and helped fill them with blankets, lotions and other necessities.
Then they traveled the neighborhood to go Christmas caroling.
Bell said the cousins usually pool the money they would spend on each other on their Christmas project.
“They’re all blessed. They don’t need presents,” Bell said.