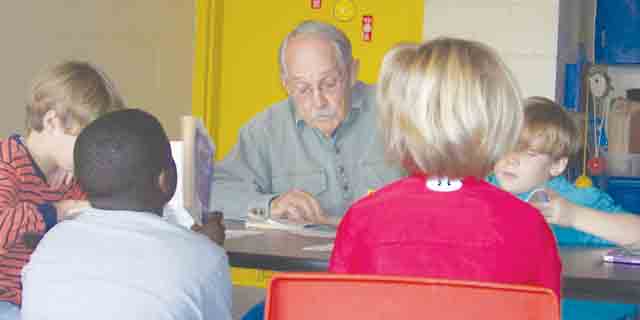 Hayes, center, is shown with a group of fourth grade students he mentors at Brewton Elementary School.

Eager and expectant, a small group of fourth-grade boys were gathered around a table Thursday intently reading and listening — and getting a history lesson from Dr. Bob Hayes in the process.

Hayes, along with more than a dozen other volunteers, is part of a mentoring program between Brewton Elementary School students and members of First United Methodist Church.
Ruth Parker has served as the liaison for the mentoring volunteers through First United Methodist church pairing volunteers with teachers and students.
“Our pastor Ed Glaize, asked me to work on this between the church and the school,” Parker said. “I had taught at the school for a long time and had remained active there. I was happy to work on the project.”
Parker said the first step in gathering volunteers to work with the students at BES was to announce the beginning of the program.
“We put an announcement in the church bulletin and that was all we needed to do,” Parker said. “I had people coming up to me wanting to volunteer. I didn’t have to make a lot of phone calls or do any begging. People were ready to help.”
The program, which began shortly after the start of the 2012 school year, has been beneficial to teachers, students and even the volunteers.
“It’s amazing,” Parker said. “I don’t do anything and they are about jumping out of their seats. They love and crave attention. They have a lot of resources, but there are never enough. They have a lot of help at the school, but sometimes brighter children don’t have enough to keep them busy. There was an idea for a book club as an enrichment project more than a remedial one. Ed is doing ‘Narnia,’ and the children love it.”
Not only are the children responding well to the volunteering mentors, Parker said even the volunteers are learning well.
“Becky Riggs mentioned that the children adore Dr. Hayes,” Parker said. “He was so excited but was reluctant in knowing what to talk to children about. His work has lit a fire in them.”
Hayes said his joy in mentoring with the students has grown during his time at the school.
“I do this to honor my sons,” Hayes said. “Jim and Bob were good kids and good students. I do this to honor them.”
Hayes, who lost his sons when they were still teenagers, has even used the story of his loss to help other students he mentors in the program.
“I had one boy who had lost his mother and I bonded with him because of that,” Hayes said. “I explain the loss of my sons and that has helped them understand sorrow.”
During Thursday’s session with readers, Hayes would interrupt their reading to provide information concerning specific aspects of the story.
As the group read “Snow Treasure – A Story of Courage and Adventure,” Hayes shared the fact that he had been in military service in the Air Force stationed near Norway — the geographical setting of the book.
“We have covered so much more than reading here,” Hayes said. “We’ve had some lessons in geography, pronunciations and even how to be kind and helpful.”
Hayes said he asked the students in the group to volunteer to do something for their parents that week. As the group gathered again, Hayes asked how the volunteer help was taken at home.
“One child told me his parents nearly fainted that he would offer to help,” Hayes said. “These children are begging to get more attentive and more involved.”
Parker said the program, going strong now at the school, is something that has given students and extended lesson on stories, grammar and the classics.
“We asked the school to let us know which teachers wanted a volunteer and their time of preference for the student groups,” Parker said. “The volunteers are now reading to or listening to the children read. This helps them to be better readers. These days, parents just don’t have a lot of time to listen to their children read or to read to the children. That’s were we can help. Reading to a child is important. Even after they learn to read, their vocabulary needs to be expanded. The classics help expand that vocabulary.”
Parker also said reading to the students has given them a better view of words they may have seen and understood but may have not pronounced them properly.
“I have heard students and even some adults mispronounce words,” Parker said. “Words like debut, chasm and chameleon can be easy to mispronounce unless you’ve heard it pronounced correctly.”
Parker said her work in helping to coordinate the reading mentors from the church for BES is not the most important work.
“The volunteers do all the work,” Parker said. “We have great volunteers and the list is continuing to grow with some people wanting to get involved after the first of the year.”
Currently volunteers from First United Methodist Church are Dr. Bob Hayes, Tami Deatherage, Dick and Linda McEwan, Ed Glaize, Hermine Downing, Madge Corbin, Ellen Dunson, Sun Andress, Becky Riggs, Beverly Stark, Joice Jernigan, Lesa Nelson, Lisa Greer, Curtis Glaize, Debbie Stokes, Lynette Avant, Maureen Edwards, Ted Jennings and a large number of teachers at Brewton Elementary School.