TRM and WSN battle on the hardwood 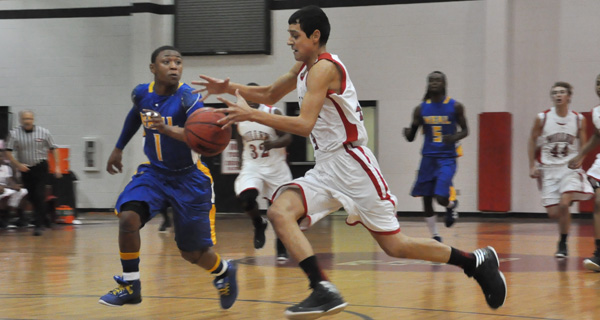 The T.R. Miller Tigers and the W.S. Neal Eagles battled on the hardwood Friday night in Brewton and two of the three Friday winners saw their first wins of the season come against their rival.
The T.R. Miller Lady Tigers came out on top with a 42-33 win to capture their first win of the season while the W.S. Neal varsity Eagles earned a 46-40 win in the varsity game for their first win this season. In the B-team game Friday, T.R. Miller came out on top with a 27-23 win.
With the wins, the Tiger B-team improved to 2-2 with their second straight win while the Eagle B-team fell to 0-2. The Lady Tigers of T.R. Miller improved their record to 1-6 while W.S. Neal dropped to 0-2. In varsity action, W.S. Neal went to 1-1 while the Tigers fell to 1-3.
W.S. Neal was scheduled to play at Geneva Tuesday and will play in the county tournament Friday and Saturday as well as the Lady Tigers and varsity Tigers of T.R. Miller.
Both B-teams will be off until Friday, Jan. 4.

TRM B-team 27, WSN B-team 23
Leading by 10 points— 27-17—with 1:09 left in the game, the T.R. Miller Tiger B-team held off a late W.S. Neal rally Friday night at home to get their second win of the season by a score of 27-23.
T.R. Miller led W.S. Neal 5-3 after one quarter and 10-5 at the half after edging out the Eagles 5-2 in the second quarter.
In the third quarter, T.R. Miller took a 23-14 lead over the Eagles after coming away with a 13-9 scoring advantage in the quarter.
In the fourth quarter, T.R. Miller built a 10-point lead with just over one minute left to play before the Eagles ended the game on a 6-0 run. The run for the Eagles cut the lead to four points, 27-23, with 2.6 seconds left, but it was not enough as T.R. Miller earned the win.
Markail Mitchell led the Tigers with 12 points while Tamerick Jenkins added seven. Alex Daugherty added three points and Carlos Thomas and Austin Holmes had two points each. Marcus Paul finished with one point in the win.
For W.S. Neal, Tre Smith and Troy Lewis both had five points each while Robin Swift had four points. Keaton Yuhasz and Ty Alexander both had three points each.
The Tigers shot 3-for-8 from the free throw line while W.S. Neal was 4-for-8 in the loss.

TRM Lady Tigers 42, WSN Lady Eagles 33
In a game marred by fouls—a total of 53 free throws were attempted—the T.R. Miller Lady Tigers clawed their way to a nine-point win for their first win of the season.
The Lady Tigers used their trademark defense to help key an 18-9 run in the third quarter to lead them to the win.
“It is always good to win against Neal,” T.R. Miller Lady Tiger head coach Ron Jackson said. “We started out kind of slow, but the main thing is for about three or four minutes there, we were able to get our full court pressure defense together and we got four or five turnovers. We looked like some of the T.R. Miller Lady Tigers from the past. That little run there was the difference in the ballgame.”
Jackson pointed out good games by Sha Nicholson and Lateysia Montgomery helped lead his youthful team.
“Sha did good for us on the boards (rebounding),” Jackson said. “I don’t know how many she had, but she did good for us. (Lateysia) was able to put enough determination to help her get enough points. We got a lot of young players that are coming along. Once they stay and get a good enough understanding of the ballgame, I think we will have a pretty good team with this group. We have one senior, one junior, one sophomore and the rest of them are freshmen. We have two eighth graders so we have a young team and the eighth grader played a lot of minutes. The main thing is if we just focus on our defense and keep pressure on our opponents and get the easy baskets, we will win some ballgames.”
T.R. Miller took an early 2-0 lead on W.S. Neal with 4:31 left in the first quarter. From there, W.S. Neal used a 4-0 run to end the quarter with a 4-2 lead. The Lady Eagles continued their run into the second quarter and increased it to a 7-0 run to take a 7-2 with 6:36 left in the second quarter.
T.R. Miller ended the run with 5:22 left in the second quarter and would outscore the Lady Eagles 9-6 in the quarter to take an 11-10 lead at the half.
In the third quarter, W.S. Neal grabbed a 17-16 lead over the Lady Tigers with 5:07 left to play, but that keyed a 6-0 run for the Lady Tigers to help propel them to the win.
The Lady Tigers would grab a 22-17 lead with 2:12 left in the third and would outscore W.S. Neal 18-9 in the quarter to lead 29-19 heading into the fourth.
In the fourth quarter, W.S. Neal would edge the Lady Tigers 14-13, but T.R. Miller hung on for the nine-point win.
Montgomery led the Lady Tigers with 19 points and was joined in double figures by Nicholson who added 11 points. O’Nesha Hall had five points while Emonea Curry had four points and Mekia Williams had three points.
For W.S. Neal, KeKe Floyd led with a game high 23 points and was 9-for-18 from the free throw line with two rebounds and eight steals.
Glenasia Butler, Tiana Smith, Taylor Burns and Arianna Jones with two points each. Mariah Davis and Courtney Emmons all had one point each in the loss.
T.R. Miller shot 13-of-24 from the free throw line in the win while the Lady Eagles were 11-for-29.
“I think in the girls game we fought hard but the shots would just not fall,” W.S. Neal Lady Eagle head coach Kason Whitten said. “I think that caught up with us. With this just being our second game of the season, I think the girls are still kind of tight. But I think when we see this team again we will be at another higher level consistently.”

WSN varsity Eagles 46, TRM varsity Tigers 40
A 7-0 run and a 13-0 run for W.S. Neal in the third quarter led to a 21-4 scoring advantage for them over the Tigers Friday night in Brewton to help lead them to their first win of the season with a 46-40 win.
Trailing 18-14 at the half, W.S. Neal started the third quarter on a 7-0 run to take a 21-18 lead over T.R. Miller with 6:31 to play in the quarter.
After the Tigers cut the lead to 21-20 with 4:07 left to play in the third, W.S. Neal went on a 13-0 run to take a 34-20 lead with 1:15 left before the fourth. As if the run was not enough to excite the Eagles and their fans, Josiah Nettles capped off the run with a dunk with 1:58 left in the quarter to bring the Eagles and their fans to their feet.
W.S. Neal would end the quarter with a 35-22 lead. In the fourth, T.R. Miller ended the game on an 18-11 run—including a 7-0 run at one point to get as close as 40-36 with 1:21 left to play in the game—but the Eagles earned the win by six.
T.R. Miller led W.S. Neal 13-6 after one quarter of play after using a 7-0 run in the quarter.
In the second quarter, W.S. Neal outscored the Tigers 8-5 to trail 18-14 after the first half.
“Our boys just fought,” W.S. Neal varsity Eagle head coach Whitten said. “The boys were really excited about this game. They really fought hard to really try and carry the football momentum into this game. Our team is nothing but football players. It was more or less a pride thing this year for us to try and get our first win against our rival this year. Both of these boys and girls team from T.R. Miller are good teams. Anytime you are lucky enough to get a win against them it is good. Coach Jackson is a good coach and both teams will be ready for us the next time we see them this year.”
For W.S. Neal, D.J. Hodges led with 11 points and Austin Dixon had nine points.
Montrel Banks finished with eight points along with Nettles. Trevor Burns and Tyshawn Davis both had four points each. Malcolm Hawthorne had two points.
Hodges finished with seven rebounds and one assist while Dixon had two rebounds. Nettles had nine rebounds, two assists and two steals along with five blocks.
Chardian Johnson led the Tigers in the loss with 18 points while Jamar Prime finished with nine points. David Barragan had seven points while Caleb Hubbard, Caden Lodge, and Jalen Jones all had two points each.
Just like the girls game prior, the varsity game was also marred by fouls. The two teams combined to shoot 58 total free throws with T.R. Miller going 7-for-21 from the line and W.S. Neal going 13-for-37.
“We just didn’t do a very good job with the ball,” T.R. Miller varsity Tiger head coach Juan Johnson said. “I think that has to do with the fact of having a young team and are inexperienced in some situations. They went up-tempo in some situations and hit a couple of shots down there. They were able to get some key 3s and they were able to go on a little run. Basketball is a game of runs. We never got ours and they got theirs. We were never able to slow it down in the third quarter and it just got out of reach. We just could never quite get it back.”