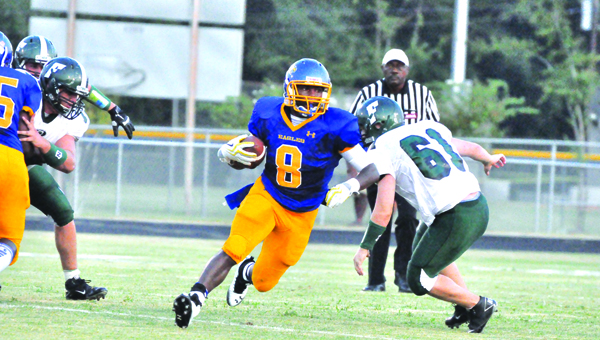 A long way: That is how W.S. Neal Eagle head football coach Doug Hoehn described as how far senior running back Marquese Banks has come.
On Wednesday, Banks was named as the Alabama Sports Writers Association’s All-State honorable mention running back for class 3A.
Banks rushed for 236 attempts and amassed 2,059 yards for an average of 8.7 yards per carry and scored 22 touchdowns to help lead the Eagles to a 9-3 record during the 2012 campaign. Banks and the Eagles made it to the second round of the playoffs before losing to eventual state runner-up Fayette County.
“Marquese has meant a lot to the team the last two years,” Hoehn, who just finished his second year at the school, said. “He is a kid who has really bought into what we were doing. His attitude improved on a weekly basis, as did his work ethic. He worked extremely hard in the weight room and worked extremely hard on his conditioning and his feet work and his agility work. Everything we do from winter workouts to spring and summer, he worked extremely hard at it. You can see how that paid off.”
As a junior last season, Banks rushed for 1,401 yards on 195 carries for an average of 7.2 yards per carry and scored 12 touchdowns.
“He had a great year last year,” Hoehn said. “He started with us the January before last year and worked that spring and that summer and that work paid off for him as he ran for over 1,400 yards on the year. I think that is when the light went off. He finally realized that the work really does make a difference. He dedicated himself over the last two years. He is not a natural running back. I think he is suited for linebacker on defense but he was just so valuable for us on offense. A lot of his yards were just extremely sheer determination, strength, stamina and aggressiveness. Those are things he worked on all season to achieve.”
Hoehn, who saw his Eagles turn a 1-9 record from the 2011 season into nine wins in 2012 and saw the Eagles finish the season with 5,088 yards rushing and 56 rushing touchdowns, said he tells his running backs to not let the first guy tackle them.
“If you can’t make them miss we tell them that they have to run through them,” he said. “Ninety percent of the time, Marquese would do just that and just run right through them. We are proud of what he has done. We really are. He has come a long ways.”
But while the end result turned out well for Banks, it did not start well for the bruising back.
“I will never forget our first workouts here,” Hoehn said of Banks. “He could not make it through our weight workouts or our running workouts. He was not the only in that position as the kids were just not used to it. But I can remember him during our running workouts, he just was not able to make it. He has come a long ways. He really has.”
While describing Banks as having come a long ways, Hoehn said it goes past the football field and has shown up in the classroom and in his character.
“His attitude has come a long ways,” Hoehn said. “He is doing much better in school. His schoolwork has also come a long ways. He is in here (the field house) on a daily basis doing his homework before going to basketball practice. He would stay after football practice and do his school work during football season. He has persistent in doing his schoolwork. In football, he did the hard work and got the rewards from it. That is spreading over to his other life and I think now he realizes if he does it the right way, with a good attitude, he can do more in life than he thought he could do.”
Banks is the first W.S. Neal player since Ashton Elliott in 2010 to make the list. Elliott made the team as honorable mention wide receiver. Banks was the lone player from W.S. Neal and T.R. Miller to make the team this season. This was the first time no T.R. Miller player has made the all-state since 1983, according to information posted on the Website AHSFHS.org. Here is the complete list of the All-State winners from classes 1A to 6A and the AISA along with their position, name, school, class, height and weight:
2012 All-State Football Team
CLASS 6A
Offense
QB – Jeremy Johnson, Carver-Montgomery, Sr., 6-6, 219
RB – Julius McCall, Chelsea, Sr., 5-10, 180
RB – Racean Thomas, Oxford, Jr., 6-0, 200
RB – Berron Tyson, Baker, Sr., 5-9, 170
WR – Brian Clark, Clay-Chalkville, Jr., 6-3, 195
WR – Michael Powers, Hoover, Sr., 5-8, 170
TE – Jakell Mitchell, Opelika, Jr., 6-3, 210
OL – Austin Golson, Prattville, Sr., 6-5, 285
OL – Grant Hill, Huntsville, Sr. 6-6, 290
OL – Harrison Louden, McGill-Toolen, Sr., 6-5, 286
OL – Darius Preyer, Carver-Montgomery, Sr., 6-1, 266
OL – John Grady Welden, Mountain Brook, Sr., 6-3, 267
K – Robert Greene, Clay-Chalkville, Sr., 5-9, 160
ATH – Nate Andrews, Fairhope, Sr., 6-1, 205

TRM girls and boys basketball to play in Jackson…