Set mini-goals to help stick to your New Year resolutions 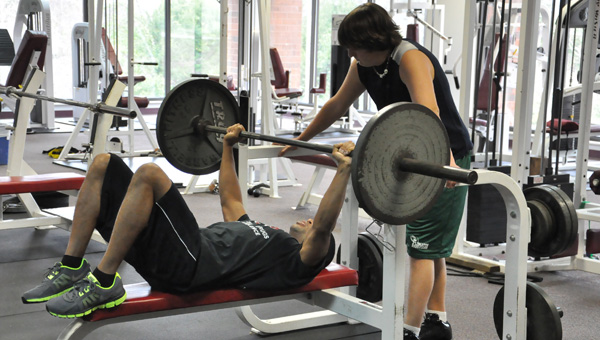 With each and every passing of an old year and the coming of the new year, there can be one thing that will surely be found: new years resolutions.
As 2012 ended Monday night and 2013 dawned, the thoughts of quitting smoking and losing weight crossed the minds of many people.
One place that is sure to be hopping Wednesday when doors open is the Brewton Area YMCA as those wanting to lose weight will hit the Y’s fitness center.
Vivian Layton of the YMCA offered tips to help those who set resolutions, stick with them.
“Make the goal attainable and then cut that goal in half,” Layton said. “You may think it is attainable, but it is not. Once you reach that ‘mini goal,’ go on to the next mini goal.”
Layton also said to allow for an appropriate period for obtaining that goal.
“Some may can obtain a goal in six weeks where another person may obtain the same goal in 12 weeks,” she said. “Allow time and your body to make the adjustments. If you are used to eating a lot, eat only half of it. Don’t just stop eating. If you do that, your body will react in a negative way.”
While Layton mostly deals with women, YMCA director Steven Dickey offered some of the same tips for men and for women.
“Get an accountability partner,” Dickey said. “Have someone work out with you instead of going on your own.”
Dickey said statistics show those that work out with a friend versus doing things on their own, see greater results.
“Statistics show that if people go to classes where there are a lot of people, they are more apt to see more results,” he said. “They develop relationships. You see someone in your class at Walmart and they say they have not seen you in awhile at class. That makes people more apt to not miss class. The success rate is much lower on your own.”
Another tip Dickey offered is for people not to get frustrated.
“Expectations are always higher,” Dickey said. “You can’t get things back in a week after taking off for months. It is a slow process. Don’t get frustrated.”
Both Layton and Dickey agreed weight is not the best way to judge things.
“We had one of our senior members the other day say that is used to take her both hands to close her car trunk, but now it only takes her one hand,” Layton said. “She said that mini goal and she accomplished it. Now she moves on to another.”
Dickey told of the example of someone walking up and down stairs.
“Don’t get frustrated if you only lose two or three pounds. Be patient,” he said. “Someone told us the other day that they don’t breathe heavy going up and down stairs now. They felt healthier just being able to walk up a set of steps.”
The YMCA will be open for normal hours starting Wednesday.