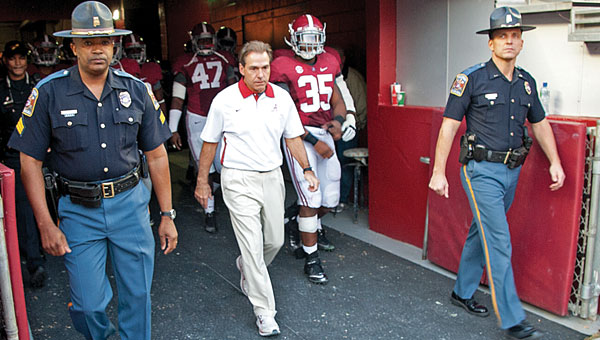 Two of the most storied teams in college football will meet on Monday night, a formula for perhaps one of the most memorable BCS games ever.
No. 2 Alabama (12-1), winner of the SEC, will take on No. 1 Notre Dame (12-0), at 7:30 p.m. on ESPN.
Brewton residents and former Alabama football players Roger Chapman and Ed Hines both predict the Crimson Tide to come away with their 15th national championship.
Brewton resident Roger Chapman, who was on the 1978 national championship Crimson Tide, said the team who stays focused will win.
“This game is getting a lot of hype and is getting a lot of air time everywhere you look,” Chapman said. “Both teams have been off and not played a long time. The team that can stay focused and execute the plays will win the game. We have been to this dance before and that will pay off in the end and Saban does a good job of keeping the team focused on the game. Look at last year’s BCS game if you need an example.”
Chapman said Alabama usually starts out with a conservative offense.
“I would not be surprised to see this same thing Monday,” he said. “Look for a quick pass to the flat on the first play, run off tackle on second down and pass again if its third and long or run if short yardage. The defense needs to make some big plays early. Notre Dame’s quarterback has struggled when he is pressured and has actually been pulled from a couple of games this year. If we can get some key stops early and force some punts, we should be able win the battle in the middle. Look for us to pick off a pass early, maybe a pick-six.”
Chapman said he does not think the Irish can score many points on the Tide.
“I think we have more offensive talent and will be able to score on them,” he said. “I think our offensive line can figure out a way to block their key defensive people. I look for (running back Eddie) Lacy and (T.J.) Yeldon to have big gains in the second half. (Quarterback) A.J. (McCarron) needs to be on target early to (wide receiver Amari) Cooper to open up the running game. The play action deep pass has worked well for us, I hope to see it on Monday. We don’t need to give them anything on the kicking game and no turnovers at all. They are not an up-tempo team, but they might try it. If we can stop it a couple of times, I think they will abandon it quickly.”
So what is Chapman’s prediction? “Not even close,” he said. “Alabama 35, Notre Dame 13.”
Alabama and Notre Dame have met six times on the football field, but the BCS title game will be the first time since 1987 that the two teams have met. Notre Dame owns a 5-1-0 series lead over the Crimson Tide with two of the games taking place in the postseason.
The BCS matchup will see the top two scoring defenses in the country squaring off. Notre Dame is ranked No. 1 as they are allowing 10.33 points per game while Alabama is No. 2 as they are allowing 10.69 points per game.
Ed Hines, who played defensive end for Bryant from 1969 to 1972, said Notre Dame is “hungry” — but he predicts a win for his alma mater.
“Obviously, this game is very important to both teams,” Hines said. “Coach Brian Kelly has done an exceptional job in turning Notre Dame’s program around and getting it in the National Championship game in just three seasons. Notre Dame is hungry. But like in most big games, the team who wins the kicking game, has the least turnovers, and has the fewest penalties is the team who most likely will win. That being said, if both teams play basically mistake free ball and each team plays to its potential, Alabama will win. I predict the score to be Alabama 31, Notre Dame 13.”

Sessions to remain on committees