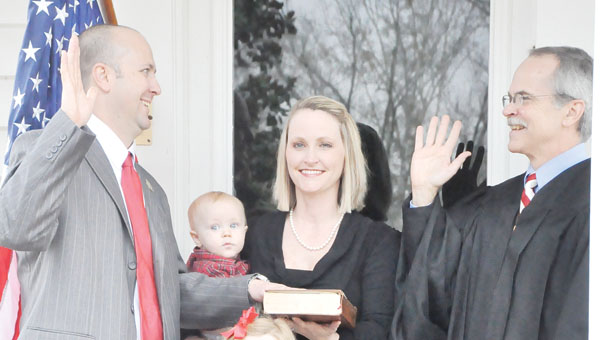 Surrounded by dozens of friends and family members, old and new colleagues, newly elected Escambia County Circuit Clerk John Robert Fountain was sworn into office in Pollard by judge Dave Jordan — but it was a family member who was not there that served as the reason behind the special ceremony.

Fountain and his wife Sarah Anne, the daughter of the late F.P. “Skippy” White, recreated the moment and location of where he was sworn in.

“It means everything,” John Robert said of recreating the moment and having all the friends and family at his ceremony. “I had told Sarah Anne a long time ago that we would come to Pollard and get this done.”

Sarah Anne said the ceremony was one of the most special events that the family has had happen to them in since the birth of their son Skipman, who was named after her father and John’s father.

As for the job of circuit clerk, Fountain said he has big shoes to fill.

“Mr. (Ken) Taylor has been a blessing to me for the last month and a half,” he said. “Just going in there and learning about the office, I still have a lot of learning to do, but I am in a very fortunate position. The ladies in the office that work, they are really good. It is just a really good office.”

Fountain said he wants to continue the kind of service that Taylor has done while in office.

“He has done tremendous work for the last 18 years in that office,” he said. “I just want to continue to offer that service for the county that he has the last 18 years. I just think he has done a fantastic job. It is a big task. It is something I don’t take lightly. It is something I am very excited about getting into and working and continuing to do work for the people of Escambia County.”

Fountain was elected to the office of Escambia County Circuit Clerk on Nov. 6.

While recreating the same picture of when Skippy was sworn in, Fountain also used the same Bible to take his oath on.