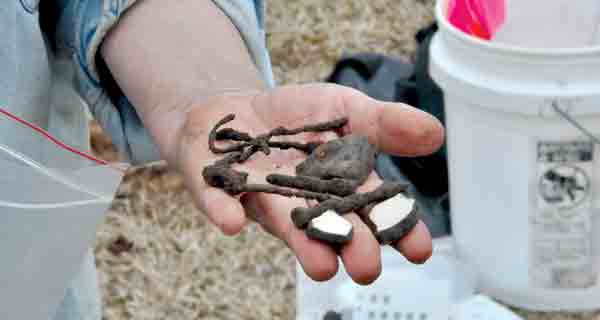 Pieces of artifacts already turning up at East Brewton site of excavation project.

A field along Shoffner Street in East Brewton can typically be seen filled with young boys and girls practicing for football – but a new season of activity is underway at the site.
A team of diggers with the South Alabama Center for Archeology has converged on the location armed with tools to determine if the exact location of Fort Crawford can be found on the site.
The team has arrived in East Brewton after being invited by members of The Escambia County Historical Society and a group of private citizens interested in learning more about the historical area.
Bonnie Gums is in charge of the local digging crew and is leading the search for Fort Crawford.
“We first came in and did a shovel survey and plotted sections about 10 yards apart over each section,” Gums said. “Then we are digging a shovel sized hole reaching down through the top soil. Each shovel full is put into a sifter and gone through throughly looking for artifacts that would lead us to believe there might be more down there. If we find concentrations of nails and artifacts, we know that we need to do more work in that area. We will be out here for a few more days and hope to get a look at the bluffs that run behind the field and the church. The land owners have been very supportive and allowed us to look around. You never know what you might find, especially on this initial check. These digs are very expensive and we won’t have much time to do our looking.”
Gums is in charge of the dig and with archeologists, Raven Christopher and Tara Potts, are assisting.
“We have to dig a deep hole,” Potts said. “It has to be deep enough to get through the sub soil and reach the red clay underneath. This field has been plowed many times and any artifacts here would have also been moved around.”
Karen Ellis Castleberry is the liaison between the archeologists and the Escambia County Historial Society. She works with the NRCS and knows the topographical area.
“I have lived on Ridge Road all my life,” Castleberry said. “There is a deep ridge that runs all the way behind Snowden Street and Ballard Street, and continues out Ridge Road. There are lots of probable artifacts at the bottom of the bluff, but there is also a lot of plain garbage. I have actually dug into the dirt out here. If we had found anything, it would have been so exciting. They have dug up lots of small pieces of glass, nails, wire and pottery. They are small and there have been no big concentrations yet, but hopefully there will be. It is very expensive to use, but we hope that sometime in the near future, a space satellite can be used to get a good look at the whole area and give us more information.”
Gums said the idea is that wherever the fort was located, it would have had garbage dumped close by, and the bluffs would have been great dumping grounds.
While that is probably true, Gums also said other forms of garbage has also been dumped there over the years long after the fort had gone. It, she said, will take a lot of sorting to see in what time period it all belongs.
The excavation work will continue over the next few days and findings will be recorded and shared with the Escambia County Hisotorical Society, Gums said.