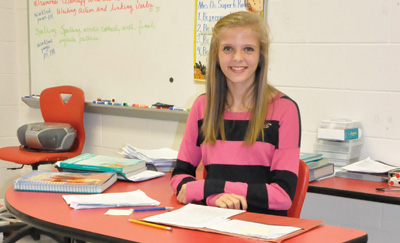 While most middle school students would be hanging out at the pool or enjoying their summer off, one Brewton Middle School student was busy writing a book.

BMS seventh grade student Sarah Katherine Byrd, 12, has been writing during her spare time away from the classroom, and the project has changed her perspective on writing and may have given her an idea to what she would like to be when she gets older.

“How I got into writing was last year we were doing expository writing,” Byrd said. “At first I chose an historical genre, but then I didn’t know what to do. I just kind of blanked out. I had a few pages done so I just trashed it. Then I kind of moved on to my first story and it was called ‘Starlight.’ Now that I look back it was kind of a train wreck. After that I just started writing a lot more and I got a lot more ideas and I have now settled in to genres like the Divergent series (a series written by her favorite author Veronica Roth) She is where I get a lot of my influence from.”

“It is really just about a law that is passed in 2096 and it is called the population law,” she said. “It says that if a woman was to have two or more children she would have to send one of the children to an orphanage in Alaska. That is where they would have to stay, but if she chose not pick between one of them, the whole family would be executed. So it is centered around twin girls named Simmons and Amanda. Her mom did not choose between them so she is living in secrecy. The government finds out about it and they come and take everybody by Simmons. Simmons is now trying to find everyone. I am still working on it. I am already thinking about stuff after this one, kind of like a sequel to it.”

While writing has become a passion of Byrd’s as of late, it was not something she liked to begin with.

“At first, writing was something that I was not interested in because I did not like writing long things at all,” she said. “It was kind of like a drag to me at first. I kind of got into it once I got an idea of what I wanted to do. It might be something that I want to do when I get older.”

If becoming an author does not work well for Byrd and her future, she has possibly found another career she may want to go after as she is now helping her former teacher at BMS, Joan Overstreet, and her students with their writing projects. The project has been titled the “Comeback Kids.”

“Sarah is just a great example of what a teacher wants to come back and help,” Overstreet said. “That is why we have called this project the Comeback Kids. She is very athletic. She gets up at 4:30 every morning and run four miles then she comes to school and she makes great grades. She is just a very conscientious student and is very well liked. She likes to write.”

Overstreet said Byrd coming back to help her started last year as she was a student in Overstreet’s class last year as a sixth grader.

“I had her in my language arts class and she just kind of worked through the year writing her stories,” Byrd said. “The first week of school this year, she came to me and asked me if I would help her with her book. Of course I told her I would and it kind of just started from there. It was just really good, so as she would make an installment to her book, I would read it to the class. And they just loved it. They just kept asking when would she write some more and wanted to know when they could hear more.”

Overstreet said one day, since things were working out so well, she brought Byrd in and sat her up at the front and let students ask her questions.

“They asked her some of the same questions that I teach, but it was different because it was coming from her,” Overstreet said. “Later I asked them why it was different because she was saying the same things I say. They told me it was because she was one of them. They got to see that what they are doing is something they can use. It is good stuff. They are writing so well. Sarah has used those writing skills and now she has come back to teach others. They love it. They absolutely love it. They never ask me how long does their writings have to be now. As a matter of fact, we get some that are so long now.”

Overstreet said the kids in her classes will write their stories and Sarah will read it.

“She puts these nice little notes on there with her pencil,” she said. “Some will say ‘watch your grammar’ or some will say ‘watch your spelling.’ Others will say ‘doing really good’ and that sort of thing. She sticks that on there and then they have a chance to go back and edit it. After that they will turn them in to me and I will grade. It has worked wonders. I also think it has helped Sarah to see how she has grown. It has just made a dramatic difference in their writings. Sarah has been very kind to everybody but she has gotten to be a rock star. She can walk down the halls and everyone goes to her asking her if she will be coming today. Sometimes, as seventh graders, some can become the big seventh graders in the school, but Sarah will stop and talk to them. She makes them feel like they can do it, too.”

Byrd said since she has been coming back and helping, she kind of wants to be a teacher now.

“It is fun helping the younger kids now,” she said. “I know a lot of them from my PE class. They are really good friends of mine. I kind of get nervous at times because I am scared I am going to screw up something sometimes. Ever since I have been in here, being a teacher has been the only thing I have thought about doing. I never had a thought of being a teacher before this.”

Overstreet said Byrd does not grade the papers, but gives students the chance to correct their stories before it comes to her to be graded.

“I am not like the big bad guy, but the get to go through Sarah before they come to me,” she said. “It is OK for them to make mistakes. One girl just kept saying she was scared, she was scared. Sarah told the girl to tell how scared she was instead of saying the same thing over and over again. She has told them to use pretty words. I have never said that before, but they understood that. I am telling them to use adjectives and she said use pretty words. She relates to them in a way to say that it is OK to mess up. She tells them she has messed up before and they see how good she is now, so they know it is OK. They get up everyday wanting to read those stories and now they are comfortable with it.”

While Byrd comes to Overstreet’s class to help her, she said she does not miss class time doing the Comeback Kids project.

“She is so good in PE that it has been OK if she has been missing that class,” Overstreet said. “That is what we have been pulling her from. Anybody that would have to come would have to come from PE. They are not missing class or anything. Noah Winton also comes some times, but Sarah is the star. She started it. We had another kid, Raven Woods in sixth grade, ask if she could be one of the kids that comes back to help, so that is where the name of “Comeback Kids” came from. Raven has really improved. The first time she wrote a story was about Barbie dolls. Sarah was able to get across that she needed to do something deeper and she did.”

BMS assistant principal Madalyn Cave said she thinks it is great to see the kids taking a risk.

“They count on each other and they encourage each other,” Cave said. “Like she said, this has given them permission to make mistakes and they are willing to take risks. I saw an eighth grader that was in the office getting checked out by her grandmother and she was bragging how she was going to be able to share her story the next day. She had one more chapter to work on. They are talking about it and they are hearing it and they are taking risks. That is what we want from them and it will help them grow.”

Byrd said it makes her feel good to hear the good comments made about her by her teachers at BMS.

Cave said the project at BMS has been great so far this school year.

“Now, there are other seventh graders who are wanting to come back and help because of this,” Cave said. “I have seen it become a trend now. We are hoping it continues to spread. It is the best surprise we have had this year.”

Byrd, 12, is in the seventh grade at BMS and is the daughter of Maggie Peavy and Jeff Peavy.

She has a sister named Lauren Byrd who is a 12th grader at T.R. Miller and a brother in the ninth grade named Garrett.