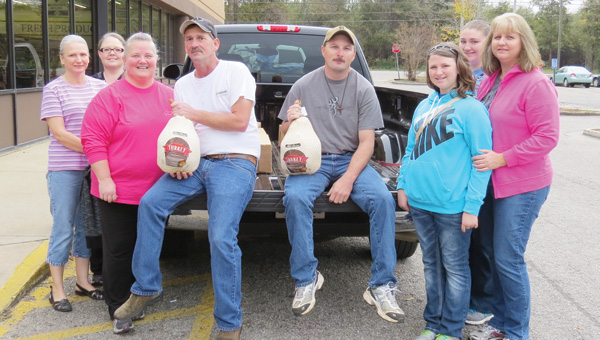 Volunteers with the Healting of the Souls ministry, above, were up working erly Saturday gathering turkeys to deliver to those in need this holiday season. Shown making the pickup were, from left, Beverly Blair, Tonya Thompson, Janet Byrd, Chris Byrd, Jeff Gunn, Olivia Britt, Jenna Britt and Lori Britt.

A group of nine volunteers gathered early Saturday to accept delivery of turkeys bound for holiday tables around the community.

Janet Byrd, leader of the Healing of the Souls ministry group, said the turkeys were part of a plan for the group to serve those in need for the upcoming holiday.

“We have prepared a full Thanksgiving dinner for the community for the past five years,” Byrd said. “But, this year, we just simply didn’t have the manpower that it takes to tackle that sort of project. Delivering these turkeys is what we decided would benefit people and still allow those who could to serve in this ministry.”

Byrd said the 200 turkeys the group picked up from a local grocer Saturday were delivered and ready for families in time for Thursday’s holiday meal.

“We delivered as many as possible on Saturday,” Byrd said. “We had deliveries to make in Brewton, East Brewton, out on the Jay Road, Castleberry, just all over the place.”

Byrd was joined in the pick-up and delivery project by her husband, Chris, and several other Healing of the Soul ministry members including Jeff Gunn, Beverly Blair, Lori Britt, Jenna Britt, Olivia Britt and Bill and Tonya Thompson.

“It takes more than you think to put together a full meal for hundreds of people,” Byrd said. “Although we have willing volunteers, the time and energy it takes to do the regular Thanksgiving meal just takes so much. We are thankful there are other groups that will providing full meals in the area, but this year, the turkeys will be our gift to those we usually serve.”