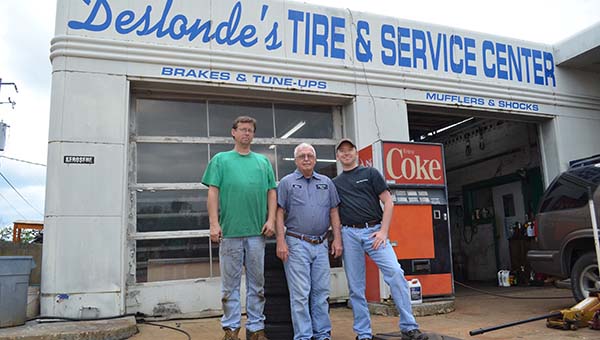 With more than 40 years of service under his belt, Mike Deslonde of Deslonde’s Tire and Service Center will be closing the doors of his business Thursday.
Deslonde, who has been in the Brewton area for 43 years and four months, has been in his current location for the last 25 years.
“For 10 years, from 1980-1990, I was at Deslonde’s 76 and auto clinic,” Deslonde said. “Before then, for nine years, I was at Brewton Heights Gulf Station with my brother, James Deslonde Jr.”
After 25 years together, the brothers split, and Deslonde venterued down south.
“My sons (Jacques Paul and Michael Adrian) started working for me then, and I was in the auto repair and tire business for those 43-plus years. I have seen a lot of changes in the automotive industry and cars.”
Deslonde, who was born and raised in Flomaton, said the auto business just fell in his lap.
“My brother James called me and said a service station was up for lease,” he said. “We looked it over in 1971 and decided to go into it. “
Deslonde said the business has seen some ups and downs.
“I have not minded being my own boss, but sometimes it was trying,” he said. “I have a wonderful group of customers that I have seen come and go over the years.”
Deslonde said his kids learned a good work ethic because he had them pushing a broom at eight years old.
“I thought that was the best thing for them…a good work ethic,” he said. “They have proved true to that.”
Adrian testified to the work ethic he learned from his father.
“It has really helped out in other jobs that I have done,” he said. “I got my work ethic from him and it has helped out tremendously. The biggest thing down here is we have always tried to be fair. Customers have said we were not the cheapest, but the honest work that we do was the reason they came.”
Deslonde said he appreciates all his customers and hate to leave them.