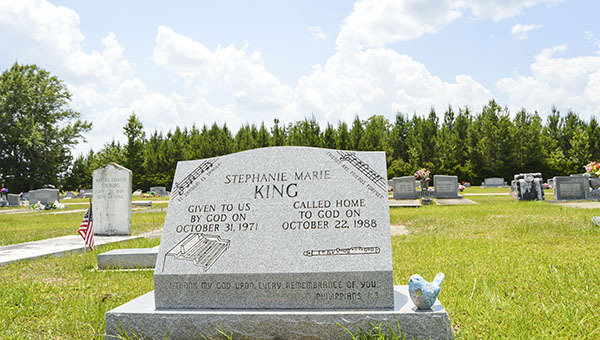 The granite headstone declares the final resting place of Stephanie King, the Brewton teen murdered after being abducted from a local church in the fall of 1988.
For years, her mother’s feelings about the man who killed her daughter and his requests for freedom have run parallel with stone’s outline – sharp and rock-hard.
But, as time often does, the years have given Sallie King a peace of some sort. Never will she say that Edward Dubose deserves to be free; but, instead, she said she knows God will give her and her family the means to handle things – no matter the outcome.
“I have to trust that He knows what is best,” King said. “It’s taken me a long, long time to get to that point. But, finally, I’m there.
“It has been a struggle – each and every day – a struggle of ‘Why?’” she said. “We’ll never know why because He is in control, and I have to trust in Him. It’s all I can do.
“But I know, that as her family, we have to try to keep him behind bars,” she said. “And that’s what we’re doing.”

Before
Stephanie – a T.R. Miller High School student – was 16, with bouncy curls and braces. Head of the flute section, she cleaned Alco Baptist Church to earn money for college.
As Sallie talks about her “sassy, independent, full-of-life” daughter, her voice gets soft as she talks about her oldest child.
It was Oct. 22, 1988, when Dubose spotted the teen at the church where the King family had made their home. Inside its walls, Stephanie played between the pews as a child; later served as organist; and cleaned on Saturdays.
A call from the church pastor alerted the family that something was amiss.
“He called and said her car was gone and the front door was wide open,” King said.
And just like that, their lives were blown open.
Police talked with Dubose following the discovery of Stephanie’s body; however, it was nearly the first of the year before he was arrested.
“We know it was a crime of opportunity,” King said of the abduction and murder.
It would be two years before Dubose was found guilty at trial and given the death penalty. Because of a procedural technicality – the lack of testimony by an expert witness in fingerprints – Dubose was granted an appeal in 1997. To avoid the death penalty, he pleaded guilty to life in prison with the possibility of parole. To this day, he sits inside Limestone Correctional Facility.
And at every opportunity, the King family fights his release from prison.

Now
Four weeks ago, King crossed the threshold of Alco Baptist Church. It was a sign, she said, that she’d begun to heal.
“Twenty-six years is a long time,” she said. “I think about who Steph would have been, the babies she would have had – all the things you think about when you have a child.”
Over the years, Dubose has not contacted the King family or offered up remorse for the child’s death, King said.
“There’s never been an ‘I’m sorry. I did a really stupid thing,’ ” King said. “I feel that (Dubose) is where he is supposed to be.
“Even after 26 years, the hurt doesn’t stop,” she said. “I believe he would do it again. I miss her. I resent him for what he did. Have I forgiven him? No. I don’t know if I can.
“At least now, I want to,” she said. “I want him to not have a strong hold on my heart, and that’s the only way it can happen. I’ll get there.”

how to help
In all of those years, each time the King family has issued a plead for the public’s help in preventing Dubose from gaining his freedom, it has been answered.
They hope this time, it is no different.
The state department of corrections website lists Dubose’s parole consideration date as July 1. State law requires the family to have 30 days notice of a parole hearing, King said.
“We know it’s coming,” she said of the hearing. “It’s only a mater of time.”
Those eligible for parole generally appear before the parole board every five years.
At Dubose’s last appearance, there was an overwhelming amount of testimony and support to keep him behind bars.
“Then, we asked for letters and petitions, and people did it,” King said. “I’m putting it all in God’s hands. If it’s His will that (Dubose) be let go, then I know that He will prepare me for it.
“But that doesn’t mean that I have to sit around and do nothing before that time comes,” she said. “I pray that God’s will be done; that His power and grace comes through in every action, word and deed. If God’s will is done, then things will be right.”
A Facebook page – “We haven’t forgotten Steph – Fight the parole of Edward Russell Dubose” – has been set up in Stephanie’s memory, asking for new petitions and letters, King said.
Letters should be mailed to Sallie King, 1034 Keego Road, Brewton, AL 36426. For instructions on how to help, visit: What you can do.

To view the petition, see Petition 2015.

Clark: Banker by day, businessman all the time