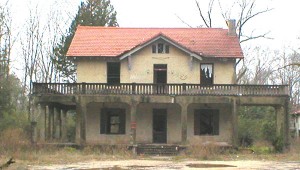 The house before the fire

Editor’s Note: During the month of October, The Brewton Standard will focus on local “spooky” places or events. If anyone has a ghost story, an unsolved mystery or even a report of a UFO, email us at brewtonstandard.com.

There is a place in Alco that some say is haunted. The Blacksher house may be haunted, but no one is able to tell a ghost story about it that can be substantiated. But if sadness and unhappiness can affect the mood of a house, it would be this one.

According to his grandsons, James U. Blacksher and Dr. Robert Conner, Erasmus Manford Blacksher (1878-1957) were born into the lap of luxury. His father and grandfather had been in the lumber and timber business for many years. Manford grew up in Mobile, but when his sister, Maggie, married Sam Foshee and came to live in Brewton, he moved too.

“He loved his sister so much that he wanted to live near her, so he moved to Brewton,” said Blacksher. “He never did a lick at any work; he just lived off the timber money.”

The Blackshers owned land, timber and lumber mills in several places, one that was between what is now St. Nicholas Avenue and Burnt Corn Creek. That mill was later sold and became the Lovelace Lumber Company.

These mills had provided a good lifestyle for those in the family and Erasus Manford decided to build a house for his family. That house was completed in 1911 and named Marinia. It was set on a large acreage in what is now Alco, some of which ran all the way down to May Branch. He chose to build it in an Italian style and covered the porches and balconies with beautiful Italian tiles, which remain to this day. It was quite an elaborate home by the day’s standards. 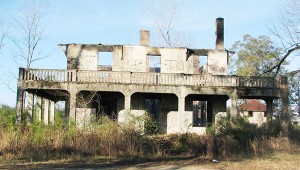 The site of the former Blacksher House as it sits today.

“He bought this statue which was an almost nude lady and carried it in his car,” said Dr. Conner. His wife was very embarrassed, but he not only kept it, but it was placed on a pedestal at the foot of the stairs. In later years someone broke into the house and stole a lot of things, including the statue.

A story was posted to the website www.deviantart.com that has a photograph and a short version of what is called a “haunted house.”

In his description, the author said,” This is the Blacksher House, the local haunted house. In the 1950s old man Blacksher went crazy and murdered his family then hung himself off the balcony. Legend says he still occupies the house. People would move in but none would stay too long.”

This story is obviously not true. Manford Blacksher died in 1957 but the rest of his family continued to live for many years. The grandsons both said that they admired their grandmother very much.

“When the stock market crashed in 1929, the family lost all of their wealth,” Blacksher said. “That’s when Mary Blacksher turned Marinia into a dairy farm and she is the one who ran it. She also went back into teaching and the children were put to work helping out on the farm. I can remember my father talking about delivering milk in a boat when the water in the creek was high.”

James Blacksher remembers coming to Brewton to spend time with his grandmother when he was small.

“We would come to visit our grandmother and have the best times,” he said.

After the death of Mary Cockrell Blacksher, the house was passed on to Martha Blacksher Conner and then to her son, Dr. Robert Conner.

Over the years, it has been rented to various people, and some of them claimed to have “seen things.”

While it was empty, teens from college and high school frequented the place and a lot of vandalism took place. Perhaps it is the neglect and mis-use, which have given the place the look of a haunted house that lends one to believe all the stories.

The old house is around 104 years old and it has seen happy times and sad times. It has seen a family lose its wealth and it has seen the loss of loved ones, but there is nothing at this time to indicate the house is haunted even though the stories continue to be told. It may be that the house has a sadness that just lends one to believe it has ghosts.

A couple of years ago, the house caught fire in the night and burned. The pretty red roof is gone, but the thick walls are still there. The Italian tiles lie broken and scattered, but the bright colors can be seen and they still spell out the name of the home, “Marinia.”